The finale episode of Pretty Little Liars’ fifth season begins with the girls surrounded by police and we learn the news of someone’s death, but don’t know whose. Then, the show flashes back 36 hours earlier.

Now let’s flash back forward to reveal who life ends in a heartbreaking death on the finale … It’s Mona. Mona’s on the phone with Aria when “A” picks the lock on the front door to her house. Mona reveals that Allison is “A” and that she has proof, but it’s too late for Mona.

The girls show up to a trashed house with blood everywhere and that’s the end for Mona … or is it? The police state that Mona was murdered, but there was no body … not yet anyway. “A” steals the baby Jesus from Emily’s Christmas decorations, opens her drunk and we see Mona dead with her eyes open and blood on her face.

At one point, we think Toby dies because Spencer is on the phone with him and he gets hit by a car, but he’s okay. However, Spencer gets arrested. 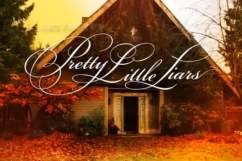