Nick Young is living the dream. He plays for the NBA and dates arguably the biggest hip hop star of the moment, Iggy Azalea. She will be performing tonight at Dick Clark’s New Year’s Rockin’ Eve With Ryan Seacrest.

Just a few days ago, on December 28, she was in L.A. rooting for her man as he played against the Phoenix Suns.

Here’s what you need to know about the 29-year-old.

1. He Dates Iggy & Their First Date Was at Target

The first time they went out, the evening consisted of a run to Target first, then a nice dinner.

In an interview with Power 106, shown below, Azalea explained, saying, “I just moved into a new place, that day, so I was like, ‘I kinda need to get some essentials…We have to do this before we go to dinner…I think it definitely broke the ice.

Now, according to Variety, the couple lives together in the L.A. home Selena Gomez once owned.

2. He Plays with the Lakers

The shooting guard/small forward had an impressive first season with the L.A. Lakers.
“Thank you fans for supporting us all year. I love you,” Young said in the Lakers’ Vine video posted below.

On the team’s blog, they summarized Young’s success like this:

Nick Young appeared in 64 games (nine starts) and averaged a team-high 17.9 points, plus 2.6 rebounds and 1.5 assists on 43.5 percent field goals and 38.6 percent from beyond the arc. In the last 15 games of the season after returning from his knee injury on Mar. 21, he was particularly efficient from the floor, shooting 47.6 percent overall and 45.3 percent on three-pointers.

No tats on the right arm Strictly for buckets

3. He Said God Gave Him the Nickname ‘Swaggy P’

In the TMZ video above, Swaggy P describes that what he will do to his girlfriend “should be illegal.”
His Instagram name is swaggyp1, and in the video he posted below, he explained the name’s origin.

“Like God came in a dream, talked to me, and he gave me that name. And I was like, ‘You know what, God? That is a funny name and I might need to run with it.’ And ever since then, I’ve been calling myself ‘Swaggy P.’ It’s a household name now,” he said.

The mother of his son is named Keonna, and was spotted at many of his basketball games earlier on in his career.

As far as Azalea’s ex goes, she dated A$AP Rocky, once telling Vibe, “I love him and that’s all there is to it.”

She also had his name tattooed on her finger.

His girlfriend has also started to become excited about his profession.

“She has gotten really into basketball from him, and he doesn’t even mind going shopping with her, which is rare,” an insider told Us Weekly of Azalea and Young. 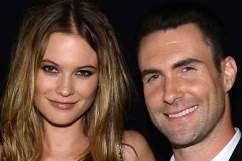