Nick Young is the boyfriend of Iggy Azalea who is performing at tonight’s 2014 MTV Video Music Awards. Read on for the facts on their relationship and some background on Young.

“@Bahar_Fenty: This is me x 100 pic.twitter.com/akQukYq3Ej” what does this quote have to do with Asap Rocky and Iggy?

Prior to dating Nick Young, Azalea dated A$AP Rocky and even got a tattoo for him on her finger. When Azalea opened up about their break up to Complex, she said:

I’ve never regretted it. I fucking loved him. I know he loved me, too. I felt like he was somebody I could count on who loved me for being me, and I don’t want to forget that. I would sacrifice a quarter of a pinky for those memories. That’s why I didn’t cross it out all the way, because if I’d covered it up all the way, that says I’m embarrassed. You shouldn’t be ashamed of the trials of becoming an adult. I wanted people to know I’m free for more possible love interests, but also not ashamed.

After the two broke up, Azalea admitted that they hated each other for a while. They eventually got over it.

2. Their First Date Was at Target

Iggy and Nick’s first date was actually at Target. In an interview with Power 106, Azalea talked about their impromptu Target date saying:

I just moved into a new place, that day, so I was like, ‘I kinda need to get some essentials…We have to do this before we go to dinner … I think it definitely broke the ice.’

3. They Had a Nude Images Scandal

A leaked naked image of Iggy and Nick hit the internet, not once but a couple times, but the image is fake. E! News reports:

The Internet blew up after what seemed to be a super-sexual NSFW photo of Iggy Azalea and her NBA boyfriend Nick Young surfaced on the web, and although you would probably love to be able to say that you saw the Aussie artist’s bare booty, that’s not the case.

Both Nick and Iggy took to Twitter to deny the nude pic was of them, but some fans still believed it was the sexy duo. Even Nick’s mother was hitting him up about the scandal to make sure it wasn’t him.

When TMZ caught up with Nick Young and girlfriend Iggy, Nick couldn’t resist talking about his beautiful girlfriend and her luscious tush. Check out the above video as Young gushes over his girl.

The couple looks like they may have a long future ahead of them. Nick even got Iggy a necklace with both of their last names together. Check it out in the above Instagram pic. 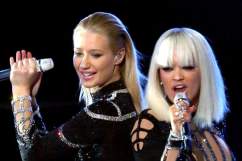