Redfoo, the singer, rapper and DJ, behind the duo LMFAO, was “glassed” by a bottle during an attack in an Australian bar, reports Australia News 7.

1. Redfoo Was Attacked in the VIP Area

A man is said to have approached Redfoo in the VIP section of the Golden Sheaf Hotel bar and smashed a glass over his head. according to the Daily Telegraph. The attack happened around 1 a.m. local time. The singer was treated at the scene for his injuries. The picture was taken just before the glassing:

2. He’s Been Tweeting About the Attack

After the incident, Redfoo tweeted, “Jealousy is a hell of a drug.”

@Joshayyyy21 jealousy is a hell of a drug!

3. The Suspect Is Facing Charges of ‘Malicious Wounding’

The suspect, a 21-year-old man, was taken into custody, appeared before a judge and was released with an order to return to court in October. He’s facing charges of malicious wounding.

4. Redfoo Is a Judge on Australian TV Show X Factor

Redfoo has been based in Australia since taking up a role as judge on the TV talen show hit X-Factor. 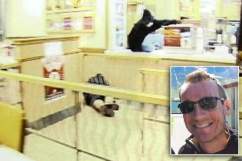 Read More
5 Fast Facts, Breaking News, Crime, LMFAO, Music
Redfoo was attacked in the VIP area of a hotel bar by a man holding a bottle.