Taylor Swift just dropped a huge bomb on the Tonight Show With Jimmy Fallon, revealing that she’ll be performing at the 2014 MTV Video Music Awards. After being asked by Fallon if the rumors were true, Swift did confirm and then said she’ll surely be getting phone calls from MTV after making the announcement. She says she hasn’t worked it all out yet, but they’re practicing and coming up with ideas for her performance.

Taylor will be joining the roster of performers which includes Beyonce, Ariana Grande, and Iggy Azalea. 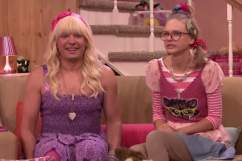