Although Vince Vaughn is outspoken in all of his movies, he is uncharacteristically quiet when it comes to his personal life.

Learn more about the woman who stole the Swinger’s heart.

1. She Got Engaged on Valentine’s Day

They dated for a year and a half before Vaughn popped the question.

At the time of their engagement, Just Jared reported that the couple “spent a romantic weekend together. He dropped to one knee to propose and presented her with a gorgeous $125,000 4-carat diamond set in platinum.”

The pair got married in Chicago, keeping their wedding private.

On the Ellen show, Vaughn gushed about her:

I met the best girl in the world. It gives you such a great purpose in your life. If I would’ve met her, I would’ve done it a long time ago so I’m very, very happy.

Sometimes, in our industry, well, I speak for myself, maybe that’s an excuse, but you don’t mature always at the same time. So if I was very fortunate that when I got ready and was open to that, then that person came into my life,” he says. “You have to be ready to receive that. No question.

The couple welcomed their daughter Locklyn in December of 2010, after a little under a year of marriage.

While she was pregnant, she visited her husband on the set of The Dilemma.

In 2007, the Calgary-area real estate agent was referred to in an article in New Home Living as a “manager with Coco Homes in Cimarron and a resident of Okotoks.”

When she got engaged, her father, Ken Weber, confirmed it to their local paper, the Montreal Gazette.

5. She Goes to Sporting Events With Vince

In the picture above, taken in May of 2010, they are enjoying the NHL finals together. 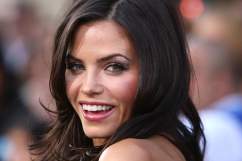