Although Alexis Bledel, star of the Gilmore Girls‘ revival, has significant-other drama on the show, she is happily married off screen.

Vincent Kartheiser, best known for his role as Pete on Mad Men, married her in a secret ceremony in June of 2014. The pair welcomed a baby boy in the fall of last year.

Here’s what you need to know about the man who stole Bledel’s heart in real life.

Mad Men’s creator told Vulture that they are a solid pair:

They’re both very down to earth, with a sense of responsibility and strong family ties. And they’ve been acting since before they can remember, which makes for a very special personality.

Their costar Elisabeth Moss agreed, telling People, “”They are such a yin and yang. I’ve known Vinny for 12 years and Alexis is just the sweetest. I’ve never seen Vincent like this. It is really cool.”

2. He Shaved His Hairline & Lost 25 Pounds to Play Pete

In Season 6 of the show, his character, Pete Campbell, went through a lot of hardships. Vulture explained it best by saying:

In the span of 13 episodes, Pete got thrown out of the house by his wife, Trudy, for cheating; ran into his father-in-law at a brothel, costing SC&P the $9 million Vicks Chemical account; got banished to the firm’s nascent Los Angeles office; and tangled with a sociopathic co-worker, Bob Benson, who stole the Chevy account from him and may have played a role in the murder of Pete’s mother.

To prepare for the downfall, Kartheiser has to look the part of a distraught man.

When he decided to shave, people warned him against it. “Most of my friends were like, Dude, don’t do that, it might never come back in! But luckily I have a good head of hair,” he told Vulture.

In the same interview, he explained his character on the HBO drama:

I don’t know if I’m proud, but I think it’s a testament to the writing over the last five years that they’ve built animosity in our audiences towards a character that has done some pretty despicable things and, at the same time, who has lived a life in a perfectly moral way. I

He bought a small home in L.A., which Dwell described as a “580-square-foot Hollywood abode”

4. He Was Once Linked to Rachel

The actor must have a penchant for dating his costars. He met the She’s All That actress on the set of The Hairy Bird, and they dated in 1998.

He dished to Vulture that Bledel helped him in the fashion area of his life.

“I still dress like I did in high school. My fiancée bought me all of this. She’s like, ‘Honestly, another ripped T-shirt? Put this on,” he told the magazine. 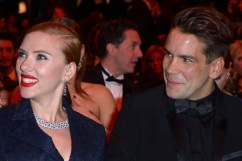