Zack Everhart specializes in tap dancing, but he’s an all-around great dancer. Check out the facts on the SYTYCD finalist below.

1. His Parents Have Their Own Dance Company

His mother Tammy and father Michael own the Great Gig Dance Company in Kennesaw but they didn’t pressure him into the profession. He started taking classes around age 8 and soon became a dedicated dancer.

He just loves performing and loves teaching. God gives you a passion and sometimes God gives you the talent to go with it, too. At heart, over the years, he’s been a normal kid. He plays video games and hangs with friends. But when he gets in the dance arena, he’s focused like a laser.

2. This Is His Second Attempt at So You Think You Can Dance

Everhart actually tried out for the show’s 9th season, but just missed the cut for the top 20. He reportedly said that judge Nigel Lythgoe told him to work on his stage presence and personality on stage. This season, Nigel’s given him a standing ovation … Quite a step up.

3. Everhart Has Other Passions, But Dance Has Always Been Number One

Though Everhart has other hobbies and passions in his life, his grandmother Karen insists that dancing has always been number one.

He’s been a year-around swimmer and has a second-degree black belt. He’s done a lot of other things. But he always came back to dance.

4. After SYTYCD, He Plans to Move to Los Angeles

Presently, Everhart works for his parents’ dance studio in addition to the Atlanta Lyric Theatre. However, he hopes to use what he learns on So You Think You Can Dance to make a full-time career. He then plans to move to Los Angeles after the show is over and pursue dance in full force.

5. He Finds SYTYCD Easier the Second Time Around

Since the first attempt at being on the show, Everhart has been working very hard at expanding his dance repertoire. He said that, having gone through the rounds before made it a little easier for him on the show this time. He knew what to expect and what to work on. 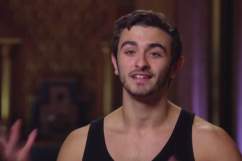