Get all the juicy info on Bobby Ciasulli from Real Housewives of New Jersey. Bobby seems like the level-headed guy on the show, though he gets a bad rap from the Marcheses. Read on for all the facts on Bobby below …

1. Jim Marchese and Bobby Went From Friends to Enemies

On this season’s Real Housewives of New Jersey, longtime friends Jim Marchese and Bobby Ciasulli turn into enemies. Marchese rubs all the cast members the wrong way with his snide comments, chauvinistic words, and anger. At once point, Bobby’s girlfriend and Jim’s wife get into a physical fight, with Bobby ending up in the middle. It gets to a point where Bobby feels harassed by Jim and his wife. On tonight’s episode of RHONJ, things really blow up when a fight between Bobby and Jim finally goes down on the show. Marchese starts talking trash to Bobby’s girlfriend while Bobby isn’t in the room and then accuses Bobby of cheating on her with “a girl he’s kept in his condo the whole time he’s been dating her.”

Marchese’s response to the way he appears on the show is:

I’d really like to thank all the producers because they portrayed me as such a kind, sweet, loving, gentle person. I’m sure everyone’s seen the sweetest side of me and all the sweet things we do as a family.

2. Bobby’s Reportedly Worth Half a Billion Dollars

Ex-friend Jim Marchese tells Reality Tea that Bobby is a fireman, but just a volunteer because he doesn’t need the money. He’s worth millions of dollars. Marchese states:

What most people don’t know is, Bobby‘s really not a fireman. He’s not a blue collar guy. Bobby’s worth half a billion dollars. Bobby’s family owns the largest auto group in the state of New Jersey. He’s a volunteer fireman. He joined the department a month or two before we started filming because he wanted to have an on-camera persona. He’s a good guy in a lot of respects but he wanted to be famous and he was willing to sacrifice myself and my wife to do it. There are hard feelings and I won’t forgive him for what he did.

Bobby didn’t want anything to do with the family business on the show, and only became a volunteer firefighter before filming began on Real Housewives of New Jersey … He wanted to be a blue collar guy, and develop a different persona on television.

Jim Marchese says that Nicole Napolitano and boyfriend Bobby only met at the casting call for RHONJ. He dishes to Reality Tea:

Bobby met Nicole at our casting call. He didn’t know her beforehand – that’s a complete lie. They met literally at the casting call. He actually sought them out because we knew of them from around town and we needed additional people to bring on the show. Amber was contacted because of her relationship with Melissa. She was actually contacted by a casting company and then once they found out about her relationship with Melissa, they were pushing her forward.

Marchese then added some real dirt on Bobby saying:

Here’s a little exclusive for you: he had carnal relations with several of the young ladies who we submitted for the show. Nicole was, like, third in line at that point. It was an ongoing joke, because I was like, ‘Bobby, you can’t sleep with every girl we submit.’ It was kind of an ironic thing. He wanted to be on the show so bad, whoever looked like they were going to be next, that’s who he started dating. Nicole got picked up, so, love at first sight I guess.

4. Ciasulli Was Criticized By Vans for Posting an “Insensitive Photo” on Twitter

The other day, Bobby Ciasulli posted a photo of a van fire on Twitter with the caption:

He received an outpouring of upset responses, calling the photo insensitive.

Check out the RHONJ forum by clicking here. Start your own discussion or join another.

5. Sources Say that Bobby Is Interested in an Acting Career

Radar Online spoke with a source who says that Bobby is on RHONJ because he’s interested in fame. Isn’t that why a lot of people join reality shows? In any event, the source stated:

Will Bobby stick around if Nicole decides to not do another season of RHONJ? Probably not … He is interested in moving to Los Angeles and pursue an acting career. 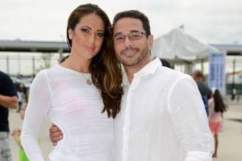