DWTS judge Julianne Hough is taken, fellas. Get all the info on her boyfriend Brooks Laich and his relationship with Hough in our 5 Fast Facts below.

Laich and Hough started dating in December 2013, though the news of their relationship didn’t hit the media until around February 2014. When talking about her relationship with Laich to Redbook, Hough compared it to those she had in the past:

Every relationship, there was nothing wrong or bad, but there was nothing right. I had one foot out because I didn’t want to get hurt. And I didn’t say what was on my mind because I didn’t want to ruffle any feathers. I needed to be perfect. Now I’m not holding anything back because I’d rather get my heart broken than never know what it is to be completely, madly in love. If I had been this open in my last relationship, who knows?

In a radio interview with Laich, the hockey player gushed about Hough, saying:

She’s a cool, cool gal. She’s just a sweetheart, very loving, very giving. She puts so much great out into the world. I’m a pretty lucky guy. 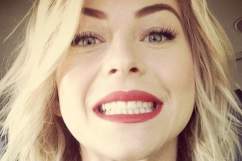 Ohh man was this fun to do again, just love this game!! pic.twitter.com/anM1rBVcE2

Laich got his start in hockey playing in the minors for AAA Tisdale Trojans until his career evolved into what it is today. Laich is an alternate captain for the Washington Capitals of the National Hockey League, who just released their new logo for the Winter Classic today. Originally, Liach was drafted by the Ottawa Senators in the 2001 NHL Entry Draft. Later, he was traded to the Capitals as part of the bargaining package for player Peter Bondra. Laich won a silver medal for the 2003 World Junior Championships. Also, in 2011, Laich signed a 6-year contract for $27 million over 6 years, totaling $4.5 million a season.

Teddy Sears was a Curve co-star of Hough’s as well as friend of Laich’s and he introduced the two. Laich dished on their meeting to D.C radio station 106.7 The Fan, saying:

On set, apparently, [Sears] was talking with Julianne … and then asked her if she’d been seeing anyone, and she said no or whatever. And I guess he was watching our hockey game … on Game Center on his iPad. I guess he just showed her the iPad and said, ‘Well I’ve got a guy for you,’ or something. 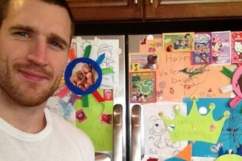 4. Laich Was Injured This Year

In March, 2014, Laich “underwent a successful procedure to release a tight adductor”, which is a part of the groin. In turn, he had to sit out the rest of the hockey season. Fortunately, this gave Laich more time to spend with Hough before she went on tour with brother Derek Hough.

5. He Is Very Charitable

Laich is a philanthropist and giving person who supports charities related to multiple sclerosis and Athletes Against Autism. When he was younger, Laich once helped his hometown of Wawota raise money to purchase a Zamboni for the local arena. He also received national media attention when he stopped to help two stranded Capitals fans change their flat tire after a Game 7 loss in the 2010 NHL playoffs. A mother and daughter had a flat tire, so he pulled over and helped them … He even apologized for the team’s loss. Laich couldn’t understand all the attention he received over the good deed.