Chris Ivery is the lucky man who snagged Grey’s Anatomy star Ellen Pompeo as a wife. Read on for the facts on their relationship, their media battles, and more.

Before Ellen was Meredith Grey (and before there even was a Meredith Grey), the love interest in Old School met music producer Chris in 2003, in a grocery store in Los Angeles. Ivery began dating Pompeo about six months later, after he says:

One night she just looked different to me.

The two happen to have a lot in common, particularly their background, which created a great bond between the two of them. Wetpaint reports:

One of the first things Chris and Ellen realized that they had in common was the fact that they both grew up just outside Boston — but the serendipity didn’t stop there. Apparently they grew up “just 10 miles away from each other” near Cambridge, MA, where Harvard’s legendary campus is. These days, they are spotted sitting front row at Celtics games constantly.

In November 2007, the couple wed in New York with a small ceremony. New York City Mayor Michael Bloomberg served as a witness at the ceremony, which took place at City Hall in Lower Manhattan by just a city clerk. People reported:

After the nuptials, the newlyweds reportedly were seen at Sunday night’s Knicks game at Madison Square Garden, before the bride returned to Hollywood to continue shooting her series.

Ivery proposed to Pompeo with a 3.5-carat diamond ring on her 37th birthday. Ivery’s not the only one with money, though. Pompeo’s net worth is approximately $30 million and she reportedly rakes in about $350,000 an episode, filming Grey’s Anatomy.

3. The Two Were on an Episode of Punk’d Together

When Ashton Kutcher was running the show Punk’d, Ellen Pompeo and her man Chris Ivery appeared on the show. Ivery was the accomplice and Pompeo definitely was fooled. The scene was Pompeo and her man dining at a restaurant with a very attractive waitress. Ivery then tips the waitress a very large amount for no reason and things get a little suspicious, creating a fire within Pompeo. Pompeo lets jealousy get the best of her and becomes angry at both Ivery and the waitress. It’s pretty hilarious.

You can view the Punk’d episode by clicking here.

4. Scandals Have Plagued the Couple

Divorce rumors and cheating scandals have plagued Ivery while together with Ellen ever since their wedding in 2007. The two have seemed to power through despite the rumors. Hollywood Life reported in 2012 that Ivery tried to “hook up” with a young girl at a Guns N’ Roses concert. A source told Hollywood Life:

Chris started talking to this gorgeous brunette and they talked on and off for most of the night. Chris was very persistent. He was with some of his buddies and they were watching him flirt and try to get this girl to go home with him! He even asked her for her number in front of his friends … Chris asked the girl to make out with him and then he kept asking her to go home with him. He knew that she recognized him and knew who he was married to but he didn’t care. He was dead set on getting this girl to go home with him. But she felt weird about it and sorry for Ellen so she didn’t do it.

Just today rumors were swirling that Pompeo and her hubby were on the outs.

5. Their Daughter’s Name Is Stella Luna

When Stella was a baby, Pompeo said that Ivery loved dressing her and buying clothes that matched his for her to wear. Their daughter is now 4 years old and Pompeo sometimes finds it hard to manage her marriage, being a mom, and being “Meredith Grey” on Grey’s Anatomy.

I have my days where I feel really guilty that I’ve been here (on set) every day if I have to work a lot. But the truth is I’m in a very blessed situation, I am so lucky. All working mums have their challenges and I’m incredibly lucky compared to most. I can afford help and I’m fortunate where I can bring her here if I miss her. 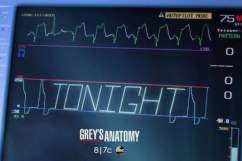