On tonight’s season 3 finale of Dallas, a Ewing was killed, as promised by the promos. The finale was filled with drama, violence, and a lot of blackmailing, as to be expected, but the one who didn’t make it out alive was … Christopher … via car bomb. Oh, and Elena is pregnant. Watch the entire ending in the above video clip.

For the past week, viewers have been wondering if the death would be that of Ann, Bobby, Sue Ellen, John Ross, or Christopher Ewing … and now we know. Despite this, however, fans are hoping that Dallas is just toying with us and that somehow Christopher survived that car bomb. It doesn’t look like he could have escaped that though …

I still dont believe Christopher exploded in that car. I think @Dallas_TNT is messing with us to think that #DallasTNT #dallasfinale 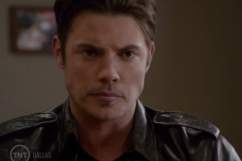