Hawaii Five-O premieres its first episode for its 5th season tonight and we’ve got all the spoilers we could find for you below to get ready for the big event.

It may be that the 100th episode also pivots into the future by starting some new story lines. The good thing about the 100th episode, it’ll really feel like there’s finality if there’s some answers to a lot of big questions that we’ve been asking over the last couple of years.

In the 100th episode it’s sort of like this Irwin Allen extravaganza where you have all these stars and most of them are people that we’ve known over the years like Ian Anthony Dale and Will Yun Lee are coming back, and a lot of the fan favorite characters are coming back. Gavin Rossdale plays a little cameo in that episode but for the most part if you’re a fan of the show and you’ve been watching it forever all your favorite characters are going to be in it.

Michelle Borth who left Hawaii Five-O at the end of Season 4 will not be returning for Season 5. Borth portrayed the character of Catherine Rollins right from the day the series was aired for the first time, up until the Season 4 finale. In fact, Borth’s character was written out of the season finale, as her character was sent off to Afghanistan to rescue a family member who had once saved her life.

Chin will put his job on the line to help Danny save his brother in season 5 … Chin (Daniel Dae Kim) will once again find himself risking his career over money during episode four, “Ka No’eau.” This time, however, it will be to pay off Matt Williams’ captors. A former hedge fund manager, the younger Williams brother fled the country during season 1 to escape embezzlement charges and the SEC. Four years later, Matt will owe some unsavory people a cool $18.5 million. Although Matt stashed away some cash before his abduction, it seems Danno (Scott Caan) will have more than a little trouble acquiring it. By time episode four rolls around, the detective will have to turn to the task force for help.

Chin also reportedly does something in the premiere that “bites him in the ass.”

– The show can be watched via live stream by clicking here.

We’re trying to launch at least one new multi-arc villain that has a couple episode arc so we’re looking at that as sort of building a big story. There’s also this big sort of arc with Danny at the beginning of the season with a character that sort of comes to him and has a relationship with Danny’s brother, and that plays over the first four episodes. So that’s a pretty big villain right from Episode 1 that’s going to play a big impact on Danny’s life.

Season 5 will make an immediate splash with several multi-episode storylines, including the return of Danny’s fugitive brother, McGarrett awaiting closure on his and Catherine’s long-distance relationship, a season-long arc for Kono/Adam and a conspiracy theory-proved-true crisis for Jerry.

In addition, the news source reveals:

The season opener finds Steve and Danny “in therapy together… airing out their differences,” says Lenkov. “It’s really fun. In fact, the [actors] kept asking, ‘Can we do another therapy scene down the road?'” … Watch for Steve’s aunt (guest star Carol Burnett) to return to Hawaii – for her impromptu wedding to a fellow chemo patient, played by singer Frankie Valli. 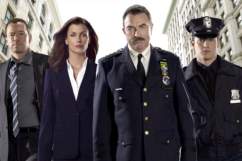