Iggy Azalea has a sex tape with Hefe Wine that she’s understandably trying to keep under wraps. Read on for the details on the tape as well as ex-boyfriend Hefe Wine.

Hefe Wine is a successful producer and music artist, who says that he’s also getting into the oil business. Hefe used to actually be Iggy’s manager. You may know his single “It Ain’t Trickin,” which features Iggy. Check it out above.

2. At First, Iggy Claimed the Sex Tape Wasn’t Her

I dont have a sex tape but for the record…

When Iggy first was made aware of the sex tape, she said it wasn’t her. After viewing it, she realized that it was indeed herself with ex Hefe Wine.

Currently, Iggy is in a relationship with athlete Nick Young. For more information on their relationship, click the below link:

3. Hefe Said That His Hard Drive Was Stolen

Hefe Wine talked with TMZ and said that his hard drive was stolen from his computer in Miami, so he was always worried about what might get out from it. He says that it happened about two months ago and he never filed a police report. He says:

I’m from the streets. I’m not that quick to call the police and file a police report.

Hefe said that the video of he and Iggy was stolen from a studio and that he didn’t release it to Vivid Entertainment.

Anyone who releases or attempts to make profit off someone else's intimate moments against their will is a sex offender.

The Daily Mail reported that Iggy Azalea threatened to sue Vivid Entertainment if they attach her name to a sex tape. Daily Mail writes:

The X-rated footage has been seen by the company’s CEO Steve Hirsch, but the Australian rapper’s lawyers have fired off a warning to the company claiming the name ‘Iggy’ can only be used by the singer.
In a letter to Vivid, the singer’s legal team say the name ‘Iggy’ protected by U.S. Trademark.

5. For the Right Price, Hefe Will Give Up the Rights to the Video

According to Hefe Wine, Iggy Azalea already signed over the rights to the sex tape with Hefe. TMZ writes:

Hefe Wine says Iggy signed a lengthy agreement with him in 2009 — obtained by TMZ — which gives him exclusive rights to “manufacture, sell, distribute and advertise ‘any’ recording embodying visual images.”

Nonetheless, he says he would only strike an agreement to distribute the tape with Vivid Entertainment if it was millions of dollars and Iggy was on board. TMZ reports:

Iggy signed the contract to cut records and music videos, but Wine believes all he has to do is put a music bed under the sex tape which he claims would then give him exclusive rights to sell it. In other words, he believes Iggy has no legal ability to block a sex tape if he wants to sell it. What’s more … the contract provides that Wine has the legal right to create, host and maintain a website to market Iggy’s works, so he believes he could create a website which would host the video. 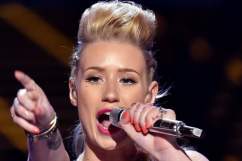 Does Iggy Azalea Have a Sex Tape?