Let’s get to know Helen Lasichanh, 34. She’s the wife of The Voice judge and amazing music artist Pharrell Williams, but that’s not all that people know her for …

1. Her Wedding to Pharrell Was a Star-Studded Affair

In October 2013, Lasichanh married Pharrell Williams in Miami on a yacht. The bride wore a a navy blue and green checked gown instead of a traditional white wedding dress. It was a star-studded ceremony and event, featuring performances by Usher and Busta Rhymes. Controversial photographer Terry Richardson took their photos beforehand. As far as the celebrity attendees, Jay-Z, Justin Timberlake, Gwen Stefani, and Robin Thicke and then wife, Paula Patton all attended.

Williams and Lasichanh actually knew each other for about two-and-a-half years before dating. And, Lasichanh played hard to get, not answering many of her now hubby’s text messages … at first. 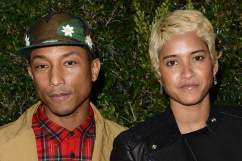 2. Lasichanh Suffered a Huge Wardrobe Malfunction at the Met Gala

One thing that Lasichanh is know for his her wardrobe slip-up after the Met Gala in 2013. Her entire boobs came out of her outfit as she stumbled outside. You can check out footage from the fumble in the above video clip.

3. Pharrell and His Wife Are Best Friends

Reveal talks all about Lasichanh’s relationship with her husband Pharrell Williams and how the two are “besties.”

While many of us would love to be even distant acquaintances of Pharrell’s, Helen has managed to secure the role of his best friend forever. The ‘Happy’ hit-maker has referred to the model as his “bestie” on more than one occasion and has even urged fellow men to marry their closest female pal. Speaking on New York’s Hot 97 radio station last April, Pharrell said: “I’m not no relationship expert, but I just recommend that you get with your bestie. Because y’all agree on everything.”

4. She Is a Fashion Icon

Lasichanh is a model and designer who makes heads turn with her fashion risks. She’s been featured in the Huffington Post and NY Post for her style, even hoisting her above her fashionable hubby Pharrell.

Lasichanh attended St. Thomas University in Miami, where she was actually a star volleyball player.

5. Rocket Man Williams Is her Son

Helen Lasichanh and Pharrell welcomed their first son, Rocket, in November 2008, and Pharrell wrote a song for him on the soundtrack of the animated film, Despicable Me. The song is called ”Rocket’s Theme’ and features sweet words about the joy that Rocket brings to the couple’s life.