On the first night of the preliminary competition this past Tuesday night, Miss Rhode Island Ivy DePew collapsed. The host told viewers that DePew had overheated and she was reported to have overheated. However, this is not actually what caused DePew to faint. DePew had a serious sinus infection that caused her to collapse. She then was brought to the local hospital that night and again the next afternoon.

When DePew fainted, her fellow contestants shielded her from the audience and she thanked them immensely for that. Beauty Pageant News reports that:

DePew discovered that she had a blockage and rare type of sinus infection, which can often have few or no noticeable symptoms, but can cause dizziness and fainting.

It’s not the typical sinus infection when you get the runny nose, the drainage and coughing. It’s actually harder to get this type of infection, because it is located up in your forehead, behind your skull. It pushes on your optical nerve, your cranium, and your brain. Usually, it’s diagnosed [only] when something extreme happens. The pressure in my head caused me to lose consciousness. 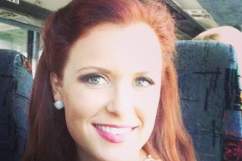 Read More
Miss America
Many want to know why Miss Rhode Island Ivy DePew fainted at the 2015 Miss America. Was she overheated, dehydrated, or did she just have a sinus infection?