Joan Rivers may be gone, but her spirit will live forever. Here are some of her most memorable moments captured on video.

1. Talking About Her Start

2. Walking Out on CNN

Joan Rivers storms out of CNN interviewComedienne Joan Rivers sat down with Fredricka Whitfield to discuss her new book, but stormed out before it was over. More from CNN at cnn.com/2014-07-05T16:48:48.000Z 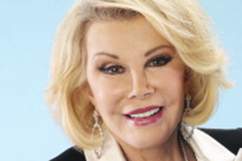 Joan Rivers’ Death: The Celebrity Tweets You Need to Read

3. Joking About a Sex Tape

Joan Rivers' Sex Tape!The hilarious Joan Rivers shares her take on the latest Hot Topics. Find out why Joan shot a sex tape with Ray J and what she really thinks about Gwyneth Paltrow. Then, Joan's daughter Melissa stops by to dish about the new season of their reality show!2014-04-24T16:27:41.000Z

4. Live at The Apollo

Read More
Celebrities, Death, Joan Rivers, R.I.P.
Joan Rivers has passed away but her spirit will live on forever. Here are some of the most memorable videos from her long and successful career in comedy.