A new photo circulating the web alleges to show Justin Bieber naked and holding his genitalia in a graphic gesture.

The leaked was reported by Gay.net, who claim to have found it on Tumblr.

The star has had alleged leaked nudes before, but this one seems fairly legitimate and is incredibly hardcore. 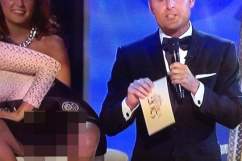