On Season 8 of The Big Bang Theory, Kaley Cuoco’s character Penny is engaged to her longtime boyfriend, Leonard.

In real life, the 28-year-old actress had a whirlwind romance at the end of last year which resulted in a wedding to tennis pro Ryan Sweeting.

Here’s what you need to know about their flirty and fun marriage and future plans.

1. They Got Married on NYE

They made it official on December 31, 2013 at Hummingbird Nest Ranch amongst 150 friends and family.

Cuoco’s ex and Big Bang costar, Johnny Galecki was there to share in her happiness.

The happy groom posted the above picture to Instagram.

2. They Knew Right Away

Cuoco once gushed to Entertainment Tonight, “From day one, I just knew immediately and it’s been magic. We have all the same family friends. We grew up with the same people, we just never met. So I kind of feel that I’ve known him my whole life.”

They met through a mutual friend, and Cuoco was putting off the initial meeting.

“We go and have a dinner date, and we’re still on our first date. He never went home,” she told Ellen DeGeneres. 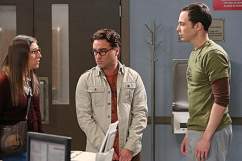 ‘The Big Bang Theory’ Season 8 Premiere: The Episode’s Pictures You Need to See

3. They Both Got Inked in the Name of Love

It appears in between her shoulder blades in three rows of large Roman numerals. The numbers, 12-31-13, represent her wedding date.

The photo above is from Sweeting’s Instagram page, which is filled with pictures of the couple kissing and joking around.

She told TV Line, “my husband makes me laugh for sure — we make each other laugh very hard.”

Adding to his pre-existing ink, Sweeting put the name of his beloved on his arm.

4. There Are Pregnancy Rumors

She told E! News, “I’m trying to get all those crop tops in before the day comes that I’m pregnant!…I’m not [pregnant]—Ali, I’m not.”

When Women’s Health posed the baby question, she said, “I can’t wait, he can’t wait. I feel like I’m meant to be a mom.”

In early September, Perez Hilton reported exclusively that he heard about an after-Emmy argument they had.

A witness told the site, “They were very angry — going back and forth at each other…Kaley — who’d been drinking rosé — whispered ‘Please don’t leave me’ to Ryan, then got up to go to the bathroom. After she walked away, Ryan put his finger to his head and pretended to shoot himself. Twice.”

In fact, Fishwrapper wrote a whole piece against the union, titled, “Sorry, We Still Don’t Like Kaley Cuoco’s Husband.“