Lauren Graham and Peter Krause, who played siblings Sarah and Adam Braverman on Parenthood, started dating in 2010. Now, the actors are involved in new projects. Graham, 49, stars in the highly anticipated revival of Gilmore Girls, which streams on Netflix on November 25. Fifty-one-year-old Krause is now on Shondra Rhimes’ new drama The Catch.

The couple manages to keep their relationship under Hollywood’s radar. However, there are times when they do dish on their romance. “We keep things pretty private [but] I will say that on my flight here from L.A. I was happy to see on DirectTV that they were playing Gilmore Girls, so I actually sat on the plane, watching Gilmore Girls on my way,” Krause told Good Morning America. “People are crazy for that show.”

In her new book, Talking as Fast as I Can: From Gilmore Girls to Gilmore Girls (and Everything in Between), Graham explained, “At our age we’d probably both been through ‘showmances’ that went south and made work an uncomfortable place to be,” she wrote. “But ultimately, our mutual wariness gave way — it just sort of happened.”

Here’s a glimpse into their love story.

1. There Are No Plans for Marriage

In a 2014 interview with Ellen Degeneres, shown above, the talk show host presented Graham with the question of whether or not she’ll be getting married.

“I don’t know. We are very happy as we are and I never have a good question for this answer,” was Graham’s initial response.

When DeGeneres pressed on, the actress answered,

“I don’t know! We are really happy. I feel like close to five years in Hollywood, its like, aren’t we married already really? It’s good the way it is.”

When Krause visited the Today Show, he was in for a surprise when the hosts made a joke out of the fact that he is dating his on-screen sibling.

Krause assured the women that the detail doesn’t affect their relationship at all.

“We keep the two things separate. We don’t call each other by our character’s names at home or anything. Come on!” he said.

However, things took a turn when the actor jokingly started making up some bedroom scenarios that “keep things spicy at home.”

When Parenthood premiered in March of 2010, the pair made this promotional video:

3. Before They Started Dating, He Invited Her Over to Play a Board Game

In an interview with Redbook, Graham explained that Krause was one of the first people she met when she moved out to L.A. in 1995.

They had done an episode of ’90s sitcom, Caroline in the City, together.

At that time, they hung out, but never dated. Graham explained what happened when he invited her over:

I remember one day he asked me over to his house to play a board game — and that’s exactly what we ended up doing. So I was like: This guy doesn’t like me. But I was also like: Who actually plays a board game? It’s so interesting to me that there was clearly a connection there back then, but I don’t think either of us was ready.

4. Lauren Doesn’t Feel That Her Relationship Is Public

When the reporter told her that many celebrities choose to keep their relationships in the public eye, Graham said, “I don’t know what those crazy kids are doing. In this day and age, I feel like you can only keep it to yourself for so long. And that’s really hard. That’s hard on a new relationship.

In 2011, when the couple took a trip to Venice together, Graham was not too forthcoming with the details. She told Today:

I went with my boyfriend, I just don’t like to talk about it because I don’t want to freak people out…Oh my god! Wait! What? Look, it’s America. My boyfriend is my brother. You can do anything you want.

Graham explained that the fact that they’re both shy may have been the reason it took them some time to come together.

“You know, he’s obviously a very confident, appealing guy, but he’s shy, and so am I. We stayed friends over the years, and I’ve always been a huge fan of his work,” she told Redbook.

In a recent interview with People, she talked about their comfortable banter. “I mean, he’s really my favorite person to talk to. And he always makes me laugh. He’s really, really funny.” 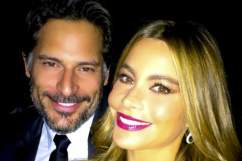