Tonight kicks off the 16th season of Law And Order: SVU and we’ve gotten together all the spoilers, cast details, episode info and more. Check it all out below if you can’t wait for the premiere! 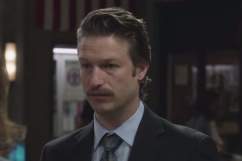 – There’s a new detective in the mix. Check out the below clip from the premiere as we meet Detective Dominick “Sonny” Carisi. Actor Peter Scanavino states:

He’s a total outsider. He’s brusk and he doesn’t really get the nuances and he’s not very experienced so he puts his foot in his mouth a lot of times. But he’s learning. He’s picking it up. I think he’s a good detective, but he’s got a lot to learn on how to like approach cases.

While Peter Gallagher’s bushy eyebrows may immediately trigger “The O.C.” theme song in your mind, they’re now going to make you hear the classic “DUN DUN!” The actor is joining “SVU” this season in a recurring role as Deputy Chief William Dodds, the tough boss in charge of all the New York City special victims units.

Aside from the main character’s development, Season 16’s premiere episode entitled “Girls Disappeared” will show the SVU taking on a “dangerous prostitution ring” in lieu with their efforts to find a killer.

– Episode two is titled “American Disgrace” and its synopsis reads:

Orion Bay clothing line press rep Carla Cannon (Kelley Missal) tells reporters she was raped by basketball superstar Shakir ‘The Shark’ Wilkins (Henry Simmons). However, the authenticity of her story and the stories of many others is questioned by Detective Carisi (Peter Scanavino) and leaves ADA Barba with a shaky case.

– Olivia has a new role this season as a single mother to baby Noah and Noah gets kidnapped in the premiere episode. Have a look at their scene together below:

In the promos for the Season 16 premiere, Little Tino is back and he’s already threatening baby Noah. It’s great to become a mother, but then again it can be really dangerous when you’re the one who locks up criminals.

Despite his new gig and his replacement within the squad, Amaro won’t be completely gone and forgotten. “He brings cases to SVU or he knows about certain cases that SVU then catches so they are inclined to go to Amaro and find out what he knows on the street level as to what is going on,” Pino said.

Amaro’s “good deeds” this season will eventually get him his job back.