Here’s what you need to know about the 34-year-old’s career highlights and personal life.

1. She Was a Fan of the Show Before Getting Cast as Bernadette

Rauch joined the cast in Season 3 as Penny’s coworker at The Cheesecake Factory.

That is the one thing she has in common with her character, waiting tables. She told Maxim, “I am similar to Bernadette in that we both spent some time waiting tables. I worked at a sports bar in New York City during college.

The comedienne was already a big fan of the series, and was elated when she won an audition.

She told Sequential Tart about hearing the news:

I remember when I got the audition, I saw it in my email box and it said “Appointment Big Bang Theory,” and I let out a little scream. I went in to that audition thinking there were a lot of girls there and a lot of different types and it was a total shot in the dark.

She met her husband, Winston Beigel, in college.

A writer and producer, he has collaborated with his wife of films.

She told Maxim about her taste in men, saying, “I absolutely love a funny guy. I am a sucker for it.” 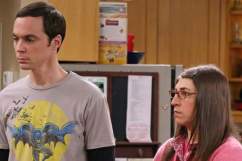 3. She Wasn’t Cool in High School

In her interview with Conan, shown above, she speaks about her fear of 13-year-old girls.

“At that age, I was made fun of a lot. I didn’t have that boyfriend at that age.”

4. She Posed for Maxim

I hear lots about penny from #TheBigBangTheory but I gotta love bernadette more. http://t.co/IuX7aaUUQi pic.twitter.com/AE7j5Zw2yr

In 2013, she did an S & M inspired shoot for Maxim.
You can see the pictures on the magazine’s site.

5. She Loved Comedy at a Young Age

The actress has always had a penchant for making people laugh.

Watch her interview with David Letterman above, where she shows a clip of her as a child, doing an impression of Pee-wee Herman.

In fact, when Origin magazine asked her what makes her come alive, she said, “Laughter. Either being made to laugh or igniting it.”

“I was a huge theatre and comedy dork as a kid, was obsessed with stand-up comedy and sitcoms. I would run home from school to finish my homework and watch reruns of the Carol Burnett Show or I Love Lucy,” she told Sequential Tart.