The next step in Michael Strahan’s fast-rising career in show biz will be a role as a stripper in the Magic Mike sequel.

The NFL Hall of Famer and Kelly and Michael co-host will appear as a stripper in Magic Mike XXL, Strahan revealed on the show Monday morning.

As the Hollywood Reporter explains, it’s not the first time Strahan has showed off his strip-dance skills.

Longtime viewers of Live know that Strahan isn’t shy when it comes to stripping down. In 2012, the then-guest-host performed a spontaneous dance — complete with tear-away pants — during an appearance by Magic Mike star Channing Tatum. A year later, after Strahan was selected as the show’s permanent co-host alongside Kelly Ripa, Tatum visited the show again and formally invited Strahan to appear in the movie, titled Magic Mike XXL.

When Tatum initially asked Strahan to be in the movie, the former Giants defensive end initially thought it was a joke. But Tatum brought it up on multiple other occasions, and eventually, Strahan realized the offer was serious.

Strahan won’t be fully nude in the movie, but he apparently won’t be wearing more than a thong either, prompting co-host Kelly Rippa to recommend getting his butt waxed in preparation. Rippa even said she’d hold Strahan’s hand during the waxing.
Watch the hilarious clip above.

Strahan will add the stripping role to an on-screen resume that already includes the Kelly and Michael gig, appearances on Good Morning America and a role as an analyst on Fox’s NFL pregame and postgame shows. 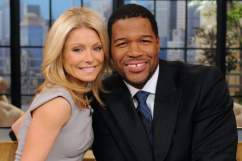