Here are the 5 Fast Facts on Rosie O’Donnell’s wife Michelle Rounds. Read on for the facts on Rounds’ illness, the couple’s wedding, and their family together.

1. O’Donnell Announced Her Engagement to Round to a Studio Audience

When Rounds met O’Donnell, she was a 40-year-old executive-search consultant from New York City. The two began dating in mid-2011 and on December 5, 2011, O’Donnell announced their engagement. During a break in the taping of The Rosie Show, O’Donnell spilled the beans to her studio audience she and Rounds were engaged.

A year later, Oprah Winfrey Network’s The Rosie Show was cancelled and Oprah released a statement:

I thank Rosie from the bottom of my heart for joining me on this journey. She has been an incredible partner, working to deliver the best possible show every single day. As I have learned in the last 15 months, a new network launch is always a challenge and ratings grow over time as you continue to gather an audience. I’m grateful to Rosie and the dedicated Rosie Show team for giving it their all. 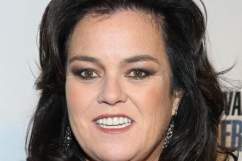 Rounds was diagnosed with desmoid tumors, a rare disease that only affects three out of every million people. In 2012, O’Donnell’s rep Cindi Berger revealed:

It is such a rare tumor. It took them quite a while to get an accurate diagnosis. She had several gastrointestinal surgeries to remove the desmoid turmors. She is now on the road to recovery.

3. The Couple Have One Child Together

Rosie O’Donnell and wife Rounds have one child together. They announced via Twitter that they adopted a baby girl named Dakota. With ex Kelli Carpenter, O’Donnell had three children — Chelsea Belle O’Donnell, Blake Christopher O’Donnell, and Vivienne Rose O’Donnell, who was born to Carpenter through artificial insemination.

In 2000, O’Donnell took in a foster child named Mia, who was removed from her O’Donnell’s care in 2001, though O’Donnell wanted to adopt her. Since then, O’Donnell has worked very hard to try to bring an end to the Florida law prohibiting same-sex family adoption.

O’Donnell also has another adopted child named Parker Jaren O’Donnell, who is all grown up now.

4. Their Wedding Was Moved Up Due to Health Issues

Rounds and O’Donnell got married on June 9, 2012 in a private ceremony that was moved up because of Rounds’ desmoid tumors. According to People:

The two originally planned to be married in August, but they choose to get married quietly in June before Rounds’s first surgery on June 14.

O’Donnell posted in her blog:

We married in private before [Michelle’s] surgery, just the [two] of us,” she wrote. “When we r both well enough will have the wedding of r dreams surrounded by those we cherish. Thankful for the love and support so many have given us during these trying times. Including all of u stranger-friends connected thru invisible strands of wi fi.

5. The Couple Bonded Over Rounds’ Dog

O’Donnell bonded with Rounds over her Pomeranian dog. O’Donnell revealed on an episode of The Rosie Show how she got acquainted with Rounds:

When I met her she was in Starbucks holding the dog. And I walked in and I thought she was like a 28-year-old heterosexual, and I thought, Oh, I’ll just chat her up. And I was like, ‘Oh, I’m trying to get one of those dogs for my daughter.’

It turned out that Rounds was a lesbian too.