Nattie Neidhart and TJ Wilson star on Total Divas together, but they’re also man and wife. Read on for the details on the couple below.

1. Nattie and TJ Take a Break from Each Other on Total Divas

In the above clip, Nattie ditches her birthday gathering after she’s disappointed by her husband’s birthday gift for her. The gift is a piece of workout equipment that she feels he bought for himself, not her.

On tonight’s episode of Total Divas, Nattie takes some time away from TJ and gets hit on while they’re on a break.

2. The Two Got Married After Dating for 12 Years

Nattie and TJ were married on an episode of Total Divas, but they almost didn’t make it down the aisle. Check out the above clip from the show.

The two wrestlers have actually known each other since Nattie was 12 years old. Nattie and TJ had been dating and living together since November 2001 after TJ had first become friends with Nattie’s “family members” Teddy Hart and Harry Smith. Finally, in 2013, the two tied the knot and their wedding was featured on Total Divas.

Nattie first managed her cousin, DH Smith, and the her boyfriend at the time, TJ Wilson. She debuted in April 2008 as Natalya, allying herself with wrestler Victoria Crawford. The next year, she began managing TJ Wilson under the new name Tyson Kidd, and they were joined by Nattie’s cousin David Hart Smith (formerly DH Smith) to form The Hart Dynasty, originally called The Hart Trilogy. Their team lasted through 2010.

4. They Are Firm on Separating Business and Pleasure

TJ Wilson told SLAM! Sports all about the secret to maintaining a good relationship with Nattie.

You have to separate business from personal. In wrestling it is very hard but you have to find that line. A lot of the couples that have split up in wrestling met while wrestling. I met Nattie way before we started wrestling and that will be the difference maker.

You have to stay true to who you are. You can go and turn it on at night and be that Diva in the ring but at the end of the day you have to think about the relationships and connections you have in your life, those are the most important things that you have. At the end of the day that is all that matters, which is why my family and I are so close and why T.J. and I have such a great relationship. We’ve been together a long time and we have a lot of trust and communication. We have fights, we have a hard time wrestling together at times because we are so emotionally attached. It is hard to step away, but we have to. When we are in Atlanta and at work, we can’t be boyfriend and girlfriend, we have to be professionals, male and female wrestler, separate entities, and then we go home later. When you are at a show or in the ring, it is like any workplace you have to be professional and make the best of the situation. There are pros and cons, you get to be with the person that you love, but deal with the drawbacks. We take it one day at a time and do the best we can. I’m sure there are going to be times when I want to give T.J. (her finishing move) the Nattie-By-Nature.

The two also stated that the support of their family helps them through a lot as well.

5. TJ and Nattie Worked as a Tag Team

After The Hart Dynasty, Nattie and TJ teamed up with each other for some time in the ring. While on NXT Redemption, Nattie became allied with former Hart Dynasty partner Tyson Kidd again, and started feuding with former protégé Kaitlyn. Nattie felt that Kaitlyn was paying too much attention to much attention to Kidd. Their team faced off in both singles and tag team competitions throughout 2012.

Nattie’s net worth is reportedly $2 million while TJ’s is an estimated $1.5 million. 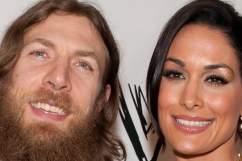