The season 4 premiere of Once Upon a Time is tonight and we’ve got all the spoilers we could find for the new season. Check it out.

– Episode 1 is called “A Tale of Two Sisters” and the episode description reads:

Elsa creates a snow monster for protection; Regina wonders if Marian will thwart her happy future.

A scared and confused Elsa finds herself in Storybrooke and, fearful of the intentions of its residents, creates a powerful snow monster for protection. With Robin Hood’s wife, Marian, back in the picture, Regina wonders if her “happily ever after” with the former thief has been completely quashed … While on their honeymoon, Mr. Gold finds an intriguing object that makes him question whether or not he should officially give Belle control over the dagger that makes him The Dark One, and Hook is dismayed to discover that Emma seems to be avoiding him while she tries to help comfort Regina after being the one responsible for bringing Marian back from the past and into Storybrooke.

Meanwhile, in Arendelle of the past, as Elsa’s sister Anna’s wedding to Kristoff nears, Anna discovers that their parents – who died on-ship during a violent storm – were heading to a mysterious destination in a quest that may have held the secret to containing Elsa’s out of control Ice powers. And against Elsa’s wishes, Anna wants to finish their journey to find out what they were looking for.

– This season will be split into two parts, creating a mid-season premiere as well.

It has been confirmed that the “Frozen” storyline will take place after the events of the Disney movie, and is not necessarily a remake of the film. A “Maleficent” story arc will also be introduced in “OUAT” when season 4 second half begins, according to Inside TV.

– You can watch the premiere via live stream by clicking here.

How about one more #OnceUponATime #scripttease before tomorrow's premiere? Hope to see ya! pic.twitter.com/ZGxZoh9wJD

– Maleficent (Kristin Bauer Van Straten) will return for a storyline connected to Princess Aurora (Sarah Bolger). However, Aurora’s not the only one who should be afraid of Maleficent. Entertainment Weekly stated that the sorceress “will not be too pleased about Regina having locked her up beneath Storybrooke.”

The Ice Queen will be a stranger in a strange land, but she will recognize at least one familiar face when she hits town. Unfortunately, it will bring up painful memories, which sets her on a mission to find answers about a significant object from her past — at all costs. Also, as was reported earlier, Elsa’s anxieties will lead to the creation of a snow monster, and let’s just say it’s nothing like the cuddly, summer-lovin’ Olaf! 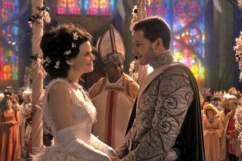