On tonight’s finale of America’s Got Talent, Quintavious Johnson will be performing with the incredible Jennifer Hudson. Have a look at the 5 Fast Facts on Johnson, who is one of the six finalists on AGT. 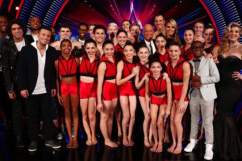 1. Johnson Is a Church Boy

Twelve-year-old Quintavious Johnson first began singing in his church in Franklin, Tennessee when he was only three. He then joined the youth choir Lime Stone Baptist Choir at age five. NBC reports that Johnson enjoys singing at local churches as well as meetings and sporting events.

Scared/Nervous is how I feel #JudgmentWeek #AGT Approaching!!! Don't miss it! Or you will be missing out on a lot!! pic.twitter.com/GhhsJDCPwa

Johnson has performed at the Grand Ole Opry and many sporting events. He has reportedly sung the National Anthem for the Franklin Cowboys, Franklin Baseball Club and Nashville Sounds. He’s a pro when it comes to singing at events like these.

3. Johnson Has Been Compared to Stevie Wonder

Quintavious Johnson has an amazing voice, and not just for his age. Seattle PI writes all about how the judges feel about Johnson:

Howard tells Quintavious that he has something special and calls him a contender; Heidi compares him to Stevie Wonder and Michael Jackson; Mel B. thinks he can win this thing easily.

4. His AGT Audition Is the Most Searched Term for His Name

When Johnson auditioned for America’s Got Talent, he sang Jennifer Hudson’s “And I Am Telling You” and got a huge reaction from the judges as well as fans. Have a look at the audition who caused a big AGT stir.

5. If He Wins AGT, He’s Going to Help Out His Mother

Johnson is very happy to be on AGT, rather than be at school with the rest of his friends. When he appeared on the Today Show (in the above video), he talks about what he’ll do if he wins the $1 million prize on America’s Got Talent. He says he’ll help out his mother and buy two dogs. Johnson said he’ll go a little crazy.