Ryan Gosling and Eva Mendes welcomed a girl on September 12. The baby name has not been released yet.

Read on for facts about the Hollywood couple and Mendes’ pregnancy.

1. Eva Denied the Rumors at First

In February, Eva visited Ellen DeGeneres, where she denied the fact that she was expecting.

The actress refused to go through the scanners at the airport, which started the baby buzz.

Mendes, 40, said, in the video above, “It all started because I didn’t want to go through the scanners at the airport. You know those X-ray scanners, which are really creepy? They basically see you naked, right? And not only that, but there’s a radiation aspect to it, so I always opt out.”

2. Their Baby News Broke the Internet

From co-stars to parents: a look back at Eva Mendes & Ryan Gosling’s romance! http://t.co/wwnxy64prz pic.twitter.com/rZavHJYFro

On July 9, it was confirmed that Mendes was seven months pregnant.

The two kept the baby news a secret for so long, which is a rarity in Hollywood.

An insider told People magazine that Mendes, “just hasn’t ever wanted anyone beyond her close friends and family knowing more than they had to…And Ryan is certainly private and always has been.”

The Twittersphere was shocked at first, and then jealous and sad.

Congrats to @RyanGosling and @EvaMendes! That’s going to be the most beautiful, bilingual, part-superhero, well-dressed, romantic baby ever. 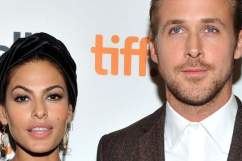 Gosling famously dated his The Notebook costar Rachel McAdams from 2005 to 2007, and then briefly again in 2008.

When they broke up, sources said it was because McAdams wasn’t ready to give Gosling the children he wanted.

When the news of Gosling’s unborn child broke, McAdams, according to OK magazine, was “devastated.”

4. Ryan May Be Acting Much Less Now

In 2011, he told told UK newspaper The Times, “I’d like to be making babies but I’m not, so I’m making movies. When someone comes along, I don’t think I’ll be able to do both and I’m fine with that. I’ll make movies until I make babies.”

During his girlfriend’s pregnancy, he really stepped up to plate as a doting dad-to-be.

An insider told Us, “Ryan goes out and gets the groceries. [Eva’s] been wanting pasta, and he’s cooking her meals.” Adds the source: “Ryan has already stepped into the role of caring father-to-be.”

5. They May Not Marry

As far as future wedding plans go, a friend of the couple told OK magazine, “Ryan doesn’t think they need to marry just because they are having a baby.”
Read More
5 Fast Facts, Celebrity Babies, Eva Mendes, Movies, Relationships, Ryan Gosling
Ryan Gosling and Eva Mendes had their baby on September 12. Here's what you need to know.