Read on for the facts on Sadie Robertson, her show Duck Dynasty, her love life, and her partnership with DWTS pro Mark Ballas …

1. Duck Dynasty Is her Claim to Fame

On the premiere of DWTS, host Erin Andrews asked Sadie if her father approved of her outfit and she said yes. Then, partner Mark Ballas was sure to say that her father will be approving all outfits and dance moves for the rest of their season together.

In light of Sadie’s being on the show Duck Dynasty, she and her DWTS partner Mark Ballas have come up with the name Team Quack Attack for their performances.

1 DAY LEFT TILL I KILL IT ON THE DANCE FLOOR AHHHHHHHHHHHHHHHHH WHO IS IN THE QUACK PACK?!?… http://t.co/zOBjbrHGRV

3. Sadie’s Grandfather Phil Robertson Is the Subject of a lot of Bad Press

Sadie has a very outspoken grandpa named Phil Robertson, who has been in the media several times for his anti-gay rants. Phil even got temporarily booted from Duck Dynasty for his making homophobic and anti-gay speeches. In one rant, he stated:

They rail against me for giving them the truth about their sin. Don’t deceive yourself. You want the verse? The news media didn’t even know it was a verse. They thought I was just mouthing off. ‘Is homosexual behavior a sin?’ The guy asked me. I said, do you not know that the wicked will not inherit the kingdom of God? Don’t be deceived. Neither the sexually immoral, nor the idolators, nor adulterers, nor male prostitutes, nor homosexual offenders, nor thieves, nor greedy, nor drunkards, nor slanderers, nor swindlers will inherit the kingdom of God.

You can watch one of his rants in the above video.

4. She’s Got a Boyfriend

Sadie has been dating her boyfriend Beau for 8 months and she loves to post sweet messages about him on her Instagram. Just a few days ago she posted the above photo with this caption:

Thanks for making these 8 months together AMAZING I can’t wait for many many many more months & memories. I love you.

5. Sadie Is a Beautiful Singer

Robertson has an adorable singing voice. Check out the above video of her first time in the recording studio. 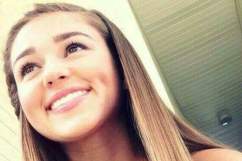