Tonight is the series premiere of Scorpion. The plot is that an eccentric genius and his team get together with a government agent to fight threats against America in the “digital age.” Elyes Gabel, Robert Patrick and Katharine McPhee star on the show. Read on for all the spoilers, cast info, and details we could gather below:

– The show is based on a true story. Irish Times writes:

Scorpion, is the story of Walter O’Brien, a computing genius who, after hacking into Nasa computers at the age of 13, was welcomed to the US on the same type of “extraordinary ability” visa that was granted to Albert Einstein. O’Brien, who is now 39, heads Scorpion Computer Services, which specialises in international security. The Scorpion pilot – the title of the series comes from O’Brien’s hacking name when he was in Ireland – has already been hailed by industry insiders.

A little run-down on the real Walter O’Brien is:

O’Brien, who grew up near Enniscorthy, Co Wexford, then moved to Callan, Co Kilkenny, when he was 13, represented Ireland in high-speed problem-solving at the 1993 International Olympiad in Informatics. It has been claimed that he has the fourth-highest IQ ever measured.

– The second episode of the series is called “Single Point of Failure.” The official press release for the episode reads:

– Spoiler TV talks about how unrealistic the show is, but how it’s also quite enjoyable:

Scorpion takes potentially real threats and solves them in ways that you could never envision, and would quite probably never happen. Once you accept this fact, the show is much easier to enjoy. The pilot focuses around a crisis at LA X in which dozens of planes are left unable to land, and the Scorpion team have to work against the clock to prevent the planes from falling out of the sky.

– Spoiler TV gives the rundown on the cast and characters:

Walter is a very disconnected individual, and it’s evident that he finds it difficult to communicate normally with the rest of society … He is super intelligent – he has a 197 IQ – and is able to solve problems in extraordinary ways. The rest of his team – Toby, Happy and Sylvester – are an interesting bunch. Toby is a brilliant behaviourist, Happy is a mechanical genius and Sylvester is a statistics guru. All three bring different, yet crucial aspects to the team. Robert Patrick (Terminator 2) plays Cabe Gallo, a Homeland Security agent who enlists Walter’s help to stop the crisis at LA X. The two have a history, and rest assured that by the end of the episode, you’ll know why Walter has issues with Cabe. The other crucial characters to the story are waitress Paige and her son Ralph. Ralph is a nine-year old genius, similarly to the other Scorpion members, but his social skills are on an even lower level than the others. 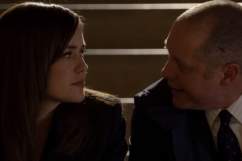