The Good Wife is featuring actor Taye Diggs and we’ve got all the details on Diggs, his girlfriend, wife Idina Menzel, and how he made his way into our hearts.

1. Diggs Is Guest-Starring on The Good Wife

Taye Diggs has joined The Good Wife cast and appears on tonight’s episode. He guest stars as Dean Levine-Wilkins, an equity partner in Lockhart/Gardner’s New York office. Check out the above clip to get a taste of his role on the show.

Creator Robert King tells E! about what Diggs brings to the show, saying:

What Taye Diggs brings is someone who is real sympathetic and an earpiece to Diane. They’re very similar, the two of them, at least on the show. They are meticulous people who don’t like the mess of Murphy’s Law, which makes it very difficult as they’re going to be moving to this old t-shirt factory that’s now been turned into a law firm as Florrick/Agos.

2. Idina Menzel Is His Estranged Wife

Idina Menzel is the estranged wife of Broadway star and Frozen favorite Idina Menzel. In 2013, the two decided to separate after over ten years of marriage after they met while acting together in the Broadway show “Rent.” 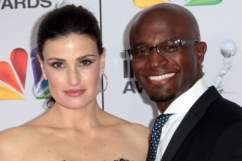 In April 2014, Diggs was spotted with new girlfriend Amanza Smith Brown and it was reported that the two had actually been dating for a while. Brown was previously married to NFL player Ralph Brown and has two children. Brown was actually a professional cheerleader for the Indianapolis Colts.

4. Taye Diggs Has No Game

Diggs may be sexy, be he says he has no game. He even says he’s actually a big nerd. He told Wendy Williams in August 2014:

I’ve never had game. Period. I was really nerdy, but these days, you know, I’m a single dad. So, it’s like, if I see somebody it’s literally, ‘So, do you have kids? Is he out of diapers yet?

5. Taye Diggs’ Film Debut Was in How Stella Got Her Groove Back

Taye Digg’s big screen debut was opposite Angela Bassett in How Stella Got Her Groove Back. Diggs played twenty-year-old Winston who falls in love with a woman twice his age, whose insecurities get the best of her. Check out the trailer from the movie that made women all over the world fall in love with Diggs.