Sadly, the lovely Joan Rivers has passed away at the age of 81 years old. Her career has been marked by plenty of memorable celebrity interviews and controversial (yet always entertaining) commentary from the red carpet of awards shows.

Wrestling fans may not know this, but Joan Rivers one conducted an in-depth TV interview with a WWE legend. Back in 1987, Joan Rivers starred on The Late Show and kept up with the buildup for WrestleMania 3. She sat down with the off-the-wall and zany “Rowdy” Roddy Piper in an awesome piece of found footage. Get ready for some dirty jokes and a wonderful insight into the mind of an 80’s pro wrestling star.

Check out the vid above and trip out over this strange combination of stars having a conversation. 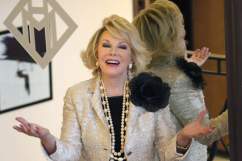