South Park promoted its 18th season premiere by trolling the Washington Redskins in a way that only Trey Parker and Matt Stone can. The clip above shows Eric Cartman stating his “deep appreciation for your team and your people” to an irritated and angry Dan Snyder after Cartman usurped the Redskins’ name when the team lost its trademark.

“Don’t you see that when you call your organization the Washington Redskins, it’s offensive to us?” Snider says.

The heavy-handed irony is South Park at its best, but it’s when the clip aired that made it genius. The promo appeared during — and only during — the Redskins’ recent game against Philadelphia.

Meanwhile, another Comedy Central staple, John Stewart’s Daily Show, will air a similar segment skewering the Redskins, this one featuring real-life fans being mocked for their support of Washington’s racial-slur name. 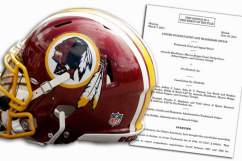