They say that behind every great man is a strong woman. Annette de la Renta (Engelhard) is the wife of the legendary Oscar de la Renta. She’s made a name for herself as a philanthropist and socialite, who was named to the International Best Dressed List Hall of Fame in 1973. Born Anne France Mannheimer, her father, German banker Fritz Mannheimer, died before her birth. In 1947, her mother Marie Antoinette Jeanne Reiss (aka Jane Englehard) moved to the United States and got remarried to Charles W. Engelhard, Jr., an industrial magnate. Annette was then adopted by Engelhard. Read on for the rest of the details on Annette, her iconic husband Oscar de la Renta, her first husband, and her accomplishments.

Oscar de la Renta’s wife Annette announced the death of her husband as caused by cancer, which he’d been battling since 2006. The legend died in their Connecticut home and many are shocked as the icon stated just a year ago that he was cancer-free.

Yes, I had cancer. Right now, I am totally clean. The only realities in life are that you are born, and that you die. We always think we are going to live forever. The dying aspect we will never accept. The one thing about having this kind of warning is how you appreciate every single day of life.

For more information on his passing, have a look at the below link: 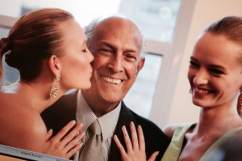 His first wife, Francoise de Langlade, died in 1983, of bone cancer. Shortly after her death, he adopted a son from an orphanage in his native country. In 1989, he married socialite Annette Engelhard Reed, 74.

Françoise de Langlade was the editor of French Vogue, who had worked for the fashion house of designer Schiaparelli..

3. The Have One Son Together Named Moises

De la Renta had stepchildren from both of his marriages. He also had an adopted son, Moises de la Renta. His son-in-law Alex Bolen currently operates as CEO of the Oscar de la Renta brand, and step-daughter Eliza Bolen is Vice President of Licensing, at Oscar de la Renta, LLC.

4. She Was Previously Married to Investor Samuel Pryor Reed

In 1960, Annette married private investor Samuel Pryor Reed, who died in 2005. They had a Roman Catholic ceremony in Bernardsville, New Jersey. Reed was a vice president of Engelhard Industries from 1960 until 1976 and he later owned American Heritage magazine. The couple had three children together and Reed created divorce accounts for each of his children which totaled $50,000,000 in shares and buildings around the world. They were all over 21 years old when the divorce occurred, so Annette received nothing more than the 15% their “marriage pact” had stated. Her three children with Reed are Beatrice Anne Reed, who married three times, Eliza Reed, who married Alexander Lytton Bolen, and Charles Reed, who married Natalie Witgosky.

5. Philanthropy Was her Life

Whether it was helping out a family friend or supporting a charity, Annette was always a giving person and still is. On 26 July 2006, Annette de la Renta was made temporary guardian of the 104-year-old socialite Brooke Astor, who was a longtime friend. After the New York Times reported elder abuse allegations being made against Astor’s son, Anthony Dryden Marshall. On October 13, 2006, de la Renta became permanent guardian and Astor died in 2007.

As for her many voluntary positions, Annette is on the boards of the Metropolitan Museum, the New York Public Library, the Morgan Library, The Animal Medical Center, the Engelhard Foundation, and Rockefeller University.

Read More
Celebrities, Fashion, Oscar de la Renta
Annette Engelhard is the wife that designer Oscar de la Renta leaves behind after his cancer-related death. Read on for the facts on her life here.