Nick is the prime suspect, and struggles to prove his innocence. Watch the scene above, as he is questioned by the authorities.

Fox News hailed it as his best work yet, saying,

“Affleck steps up his game as Nick Dunne, giving the best performance of his career. Since Affleck has become a superb director, his acting skills have greatly improved. But here Fincher brings out the best in Affleck, pushing the actor into uncharted territory. The role of Nick Dunne a perfect fit him; he effortlessly captures Nick’s surprising apathy, aloofness and sometimes brazen cockiness.”

Let’s look into the casting of the part and what we can expect on screen from the Academy Award winner.

1. He Was Cast Partly Because of His Grin

One of the reasons director David Fincher picked Ben Affleck for the role, was his winning grin.

In the interview above, with CBS This Morning, he explains the director’s logic:

He was obsessed with this idea that the relationship between how the media shows us and what’s really going on with us. And that this nice guy, who’s sort of a people pleaser, is accused of murdering his wife. And he’s standing in front of the “Missing” poster, and one of the photographers goes, “Smile,” and he kind of smiles and then all the sudden realizes, “I shouldn’t be smiling. And that image is used to kind of condemn him. 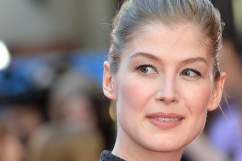 Rosamund Pike as Amy in ‘Gone Girl’: 5 Fast Facts You Need to Know

2. He Refused to Wear a Yankees Hat

At the start of the film, Nick and Amy meet in New York City.

So in a scene where Nick is going incognito in an airport, Fincher thought the obvious choice would be for Affleck to don a Yankees cap.

The Cambridge-born actor, who is a die-hard Red Sox fan would have none of it, and a fight ensued. He told the New York Times, “That was the only fight David and I had,” Mr. Affleck said, “and it was a legitimate fight.”

I said, ‘David, I love you, I would do anything for you, But I will not wear a Yankees hat. I just can’t. I can’t wear it because it’s going to become a thing, David. I will never hear the end of it. I can’t do it.’ And I couldn’t put it on my head

The buzz all started after Affleck was interviewed by MTV.

Watch the clip above, where the interviewer asks him if this movie is the debut of his penis on screen.

“The penis is in there!” he continued. “It’s IMAX penis! You’ve gotta pay fifteen bucks to see it in 3D… it’s better in 3D.”

4. He Compared it to ‘Chasing Amy’

Affleck saw the couple’s dynamic in Gone Girl to be similar to the one in Chasing Amy.

In the 1997 Kevin Smith drama, Affleck’s character falls in love with a lesbian.
He told Screenrant:

I actually think this is the perfect date movie, not because I think it’ll result in divorce – I think that’s just David’s fantasy – but because it’s the kind of movie that a husband and wife could talk about afterwards. I think a man and a woman would have different takes on what happens. The last time I was in a movie that I thought polarised men and women in an interesting way was ‘Chasing Amy.’ That was quite some time ago.

It’s hard to hide when the truth is so close to home. #GoneGirl http://t.co/NtVDW5Kw7F

In the film, Nick has to face the relentless media while he tries to prove his innocence.

Fincher found that Affleck could relate to that scrutiny in his own life. Affleck is married to actress Jennifer Garner and they have three children together.

Ben is extremely bright and he’s been through situations that are very similar to this, and he has a, he has a great sense of humor and great wit about what this situation is and how frustrating it is, and he was able to, obviously, draw on that stuff to be able to portray somebody who, you know, puts one foot in his mouth and then goes another two days and puts the other one.