Betsey Johnson is one of the most vivacious contestants on Dancing With the Stars this season. Read on for all the reasons why we love Betsey.

1. She’s Known for her Splits

Betsey Johnson may be 72 years old, but she’s more flexible that most people in their twenties. That’s one of the things that has definitely kept her in the Dancing With the Stars competition. In her contemporary routine on the show, Johnson’s flexibility stunned viewers and the judges. On the very first episode of the season, when Johnson suffered a wardrobe malfunction with a boa, she used her famous splits to save the performance. At every runway show and event that Johnson hosts, she’s always sure to end things with a split. It’s pretty much her trademark move.

2. Johnson Had Her Own Reality Show With her Daughter

XOX Betsey Johnson was Johnson’s reality show on the Style Network. Partnering with her daughter Lulu, Betsey gave viewers an inside look at the goings-on with her life, her designs, and her larger-than-life personality. Check out the mother and daughter chatting about it in the above video.

3. Designer Steve Madden Is her Night in Shining Armor

On April 26, 2012, Betsey Johnson’s company filed voluntarily for Chapter 11 bankruptcy protection, but fellow fashion designer Steve Madden saved the day. When Betsey Johnson went bankrupt and had to close the doors to all her stores, she was heartbroken until designer friend Steve Madden stepped in as her knight in shining armor. Johnson’s reality show gave fans all the background information on Madden’s big rescue of the Betsey Johnson brand. Though Madden is now the boss, he named Johnson as the creative director of her brand, giving her as much creative freedom as she wants.

4. Tony Dovolani Is her Partner on Dancing With the Stars

Tony Dovolani is the sexy dance partner that Johnson is paired with on Dancing With the Stars. He’s the older of the male pro dancers, but he’s also a fan favorite, having danced with celebrities including Audrina Patridge, Leah Remini, Wendy Williams, and Nene Leakes. Tony is married to wife Lina, and they have 3 children together.

5. Her Daughter Lulu Johnson Is a Fashion Designer Too

With my favorite gal, my daughter @lulujohnson1 who is here to support me! XoXðŸ’‹ðŸ’‹

Johnson’s daughter Lulu created a brand called Lulu and Allison, proving that the fashion bug runs in the family. Alongside her best friend Allison McClellen, Lulu formed the brand. Unfortunately, we don’t hear much about the label. Lulu writes on her Facebook:

As the daughter of iconic fashion designer, Betsey Johnson, I was born and raised in the fashion world: growing, evolving and embracing the elements of everyday life that pique my creative process. I have learned a great deal at my mother’s side; I have developed a fashion point of view and the ability to take the reigns and become my own person with something special to offer.

Tonight, Lulu appeared on Dancing With the Stars with her mother. 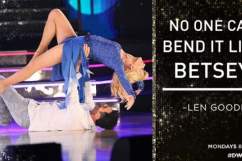 Betsey Johnson Eliminated on ‘Dancing With the Stars’