Ultimately, it was Betsey Johnson who was sent home. 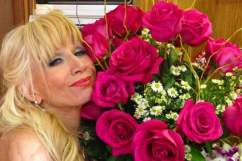 Betsey Johnson, ‘Dancing With The Stars’: 5 Fast Facts You Need to Know