The Big Bang Theory is back in its original Thursday time slot with The Misinterpretation Agitation.

Read on for spoilers that include a famous guest star and lots of sci-fi memorabilia.

1. Penny Gets Hit On

Watch the sneak peek above, where Penny admits to hiding her engagement ring at work. When Leonard presses her on it, she answers that she gets more sales when men think she’s single.

He plays the doctor who pursues Penny. He comes to the apartment to bring her flowers, and when he gets rejected, Sheldon invites him in for a hot beverage.

She gets chosen as one of fifty most beautiful scientists for an article in a Los Angeles magazine. However, at the end of the episode, the magazine cancels the article.

Amy admits to writing a letter of complaint to the publication, explaining that they would never have featured the same for men.

4. The Boys Visit a Prop Room

It turns out that the doctor, played by Thorton, tells the gang that actors like James Cameron and William Shatner have been his patients.

What really peaks their interest is when he tells them he has a big sci-fi memorabilia collection.

Turns out, in real life, the cast had some fun with the props as well as evidenced by their Instagram posts.

@themelissarauch and I having a moment with our guest star. We like to make all guests feel welcome. Even aliens.

5. The Doctor Hits on Amy & Bernie

After seeing him with roses, Amy gives the doctor the impression that she is in love with him. Later on, he moves on to hit on Bernadette. 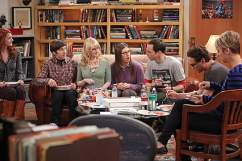