Blake Lively and husband Ryan Reynolds are expecting their first child together. Read on for all the facts.

1. Lively Says Reynolds Is Going to Be a Wonderful Father

In Vogue’s August 2014 issue, Lively began talking about the father that her husband will be:

He’s going to be a great father and leader and patriarch—he’s so meant to be all of those things. The fact that he lived so much before we got together, he’s the exact realized person that he should be. And so I get to share my life with the person he’s become, and we get to grow from there.

We should have known then that the two were expecting.

THAT BABY WILL BE BEAUTIFUL “@malikftstydia: BLAKE LIVELY IS PREGNANT OMG pic.twitter.com/mkRFLwf1vz”

Us Weekly reports on how Lively spilled the beans about her pregnancy, writing:

Lively launched a Preserve Celebration of Family on her website, celebrating in particular “that special moment at the creation of family.” She published an array of pictures of happily pregnant ladies, and after congratulating “all the expecting mothers out there,” the Gossip Girl alum added in one extra picture –- of her blooming pregnant belly!

The photo was taken by her brother Eric.

Lively has said that if she could spit out a litter of kids, she would. Reynolds echoes the exact sentiments, telling Details magazine in 2013:

We’d love to have a big family. We both come from big families — my parents did four, Blake’s did five. A lot of people say it’s crazy, but we’ll only know when we’re there, you know? We’ll walk through that fire pretty happily, I think.

Lively has posted this message on her website to further explain her focus on family:

Preserve at its core is about family. Family is the single word our founder, Blake built this home on … With family on our mind, we looked to the origin of it all—to the women in our lives who are right there, at that special moment; at the creation of family.

Johansson and Dauriac pictured together on February 29. (Getty)

This baby news comes a month after Reynolds’ former wife Scarlet Johansson gave birth to daughter Rose Dorothy in New York. It was the first child for Johansson and her partner, French journalist Romain Dauriac. 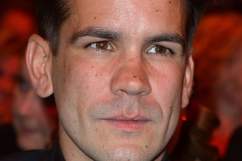 5. The Happy Couple Met on Set

In 2011 movie, Reynolds and Lively met while filming The Green Lantern together. In 2012, the two secretly wed in an intimate South Carolina ceremony. Only 35 guests were in attendance. Since their marrying, the couple tries to keep a low profile in their Bedford, New York home.