"Forgive those who have forsaken you…" #AllEmpiresEnd at 9 PM ET, tonight on @HBO. pic.twitter.com/HJuJaMI2Xd

Boardwalk Empire ends tonight after five seasons. The final episode is titled “Eldorado” and the plot description reads: Nucky plans to relocate to Manhattan; Margaret impresses Nucky and a grain company stockholder; Luciano tends to unfinished business; William shares underworld details with his boss; Nucky visits Gillian; in 1897, Nucky copes with a family crisis. Tune in here for our live blog as we give you a full recap of the finale in the form of minute-to-minute updates, tweets, and highlights from the episode, all beginning here at 9:00 p.m. EST. 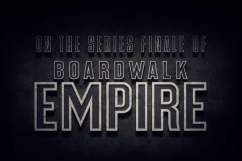 The show opens with Nucky walking naked into the ocean for an early-morning swim by his lonesome. 9:04 p.m.

A young Nucky is shown, eager to make a name for himself, though he’s not taken seriously. 9:08 p.m.

Mr. Kennedy barges into the office of Margarate Thompson to find out who’s “twisting the senator’s arm.” Kennedy tries to blackmail Thompson unsuccessfully and Thompson gets the upperhand. 9:13 p.m.

We flash back to a young Nucky who finds his wife acting strange and blood on some fabric. Nucky realizes his wife has lost the baby. 9:15 p.m.

Mr. Kennedy and Thompson decide they want to work together after a successful day with the stock market. 9:19 p.m.

Al Capone tells his son Sonny that he may be going away to jail for a little while, but he’ll be back. It’s an emotional moment between the two. 9:21 p.m.

Thompson finds Nucky on a dark balcony and he asks her how much money she’s raked in, which she tells him was over $2 million. Nucky tells Thompson that his circumstances have changed and that there are “things” he won’t do anymore … The two share an impromptu slow dance together. The lights then come on as a realtor shows the apartment they’re in to another couple. 9:24 p.m.

A showgirl of some sort, dressed like a genie, walks up to Nucky and says she’s from the future and brings a message. She pulls back a curtain and encourages Nucky to enter. Nucky looks at a screen of the “genie” singing “Twinkle Twinkle.” He then has a flashback. Young Nucky comes across a battered wife, his mother, and confronts his father as he looks down the barrell of a shotgun. 9:30 p.m.

Young Nucky takes the gun from his father, who ends up punching him and a brawl ensues. His mother and brother break up the fight and Young Nucky leaves, warning his father not to ever lay a hand on his mother again. 9:33 p.m.

Back in real time, Nucky sits down with his brother Eli and tells him that they shouldn’t see each other anymore. He believes it’s for the best. Eli is visibly upset. Before Nucky leaves, he gives Eli a bag of items and hugs his brother goodbye. 9:37 p.m.

Eli opens the bag from his brother and finds tons of cash … tons. At the bottom of the bag, he finds a shaving razor and brush. 9:38 p.m.

Al Capone heads into court and, of course, treats his walk in like a red carpet at a movie premiere. 9:39 p.m.

Valentin gets gunned down and it’s a very quick, bloody scene. 9:41 p.m.

Nucky tells Gillian that he’ll be leaving and he doesn’t want her to try to find him. 9:43 p.m.

Nucky hits up the burlesque club to “get his things.” He’s warned not to “overstay his welcome” as Mr. Luciano “wouldn’t like it.” 9:46 p.m.

Nucky finds an old letter from Mabel that’s addressed to “Bellboy Enoch.” The phone rings and Nuck flashes back to his younger self. 9:47 p.m.

Young Nucky gets his badge taken away and is fired and Nucky becomes enraged, feeling robbed … Moments later, Nucky is offered a position as Sheriff, though it’s clarifies as an “act of charity.” 9:56 p.m.

Back to the present, Nucky talks with Tommy Darmody who ends up shooting him to death on the boardwalk as payback for Gillian. Nucky dies, remembering himself as a child, swimming in the ocean, grabbing at a coin. 10:00 p.m.