UPDATE: Nucky dies at the end of the series finale, shot to death on the Atlantic City boardwalk by a young man named Tommy Darmody as payback from Gillian. Nucky bleeds to death as he pictures himself as a child, swimming in the ocean and catching a coin in the water.

Tonight at 9:00 p.m. on HBO is the finale of a series that has captured viewers for five seasons … Boardwalk Empire. While many expect a big body count at the end of a series like this, The Washington Post has another opinion as it reports:

Rather than blow off excess steam and merely deliver a body count, the writing and acting in season 5’s episodes have surpassed Boardwalk Empire’s usual high standards, offering a pitch-perfect conclusion to a story that is surprisingly human in a world that’s been intentionally strewn with subhuman behavior.

In the series finale, Nucky thinks about leaving Atlantic City for Manhattan, while Willie shares his knowledge of organized crime with his boss. In a flashback to 1897, we see young Nucky dealing with a family crisis and then forming an alliance with the Commodore that charts his career path.

Breathecast writes about the prediction of Nucky’s death, reporting:

In last week’s episode titled “Friendless Child,” Nucky gave up control of his business empire in New Jersey to the aforementioned organized crime bosses in order to save his kidnapped nephew Willie Thompson. However, that will not prevent both boss from attempting to kill Nucky when the crime drama ends its five year run this Sunday.

Will Nucky make it out of the finale alive? 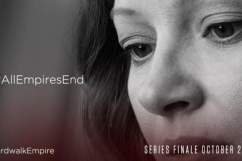 To hear about all the cast members’ memories from the show, check them out in the below video as they reflect back on five amazing seasons.