Dick Donato, who appears on VH1’s Couples Therapy drops a bombshell on tonight’s episode. Read on for the facts on Donato and his story.

Donato has kept this secret from the public since 2011. He suspects that he contracted the disease while having unprotected sex with a woman. Donato tells People:

People are going to make assumptions about how I got it, and that’s okay. People are afraid to come forward because they’re afraid of the stigma of HIV. I’m not gay and I’ve never stuck a needle in my arm, but at this point, it doesn’t matter. We create a stigma around the disease that makes it hard for people to publicly say they have it.

2. He Was Diagnosed When He Was on Big Brother 13

Donato is most known as “Evel Dick” from Big Brother 13, but what people don’t know is that his HIV diagnosis is why he left the show. Generally, when people ask him why he exited, he usually has a “smart-ass” comment, but the truth is that he was actually diagnosed while on the show. Donato tells People that the producers took him aside with information about his blood work:

They told me that something was wrong with my blood test. They had done two HIV tests. One had come back positive and the other had come back negative … When they told me, I just went numb. They had a car take me from CBS to my mother’s house. She was the first person I told.

. @Mrs_Else @Dapupp when I was told, they pulled me out of the house, never went back in. That's when I found out

3. His Ex-Girlfriend Has Been Very Supportive and She Tested Negative

“I like who I am so why do I want to lose that?” – @EvelDick #CouplesTherapy pic.twitter.com/o7pExLMNo4

When Donato found out that he had HIV, he was especially scared to tell his girlfriend, but she was very supportive. Donato tells People:

My viral load is virtually undetectable, I’m happy to say. I live a very normal life and don’t have a lot of health issues. It also means that it’s highly unlikely I could pass the disease along, although I don’t have unsafe sex anymore. I fully expect to die of something else when I get old, not HIV or AIDS.

Fortunately, Donato’s girlfriend tested negative. Donato opened up about his girlfriend’s reaction to the news, saying:

My biggest fear was telling my girlfriend. We had this long discussion, and I figured she would freak out. But she was really understanding about the whole thing. She said, ‘Whatever happens, we’ll face it together.’ She was tested and it came back negative. It was an incredible relief.

4. Stephanie Rogness-Fischer Is Trying to Work Things Out With Dick on Couples Therapy

Stephanie Rogness-Fischer is actually Donato’s ex-girlfriend now, but the two are on Couples Therapy to see if they can make things work together. As part of therapy, Donato comes out about having HIV on the show. Donato reveals his struggles with HIV to Dr. Jenn Berman as well as the rest of the cast, which includes Jenna Jameson and Juan Pablo Galavis.

I had only told 3 people before talking about it on @CouplesTherapy5 my mother, my girlfriend (who is negative) and a friend of 35 years

5. Donato’s Hoping to Do Some Good With His Coming Out to the Public

While Donato is known for being a “dick,” he’s hoping to do something good by coming out about his diagnosis. Donato tells People:

I do think about others a lot more now. I’m looking forward to going public with this, because maybe, just maybe, this can be the moment where I do something that really helps other people.

Donato’s coming out to help others, but also to help himself because he “doesn’t want to hide anymore.” 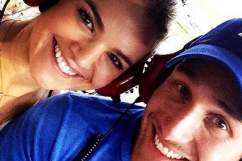