Jim Carrey is the host of tonight’s Saturday Night Live and his new movie Dumb And Dumber To comes out next month. The movie comes twenty years after the cult classic original film and many fans are hoping that Carrey’s co-star Jeff Daniels will join him on the SNL stage this evening. So, the question is, will we see Lloyd Christmas on Saturday Night Live?

Earlier tonight, Daniels posted the below tweet, reading: I’ll be watching Jim Carrey on SNL tonight. So, is Daniels just putting us on? Will he be lounging at home or is he trying to distract us from a surprise appearance he may have planned? 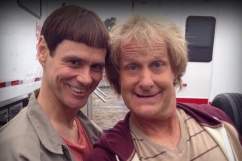