Starring opposite Ben Affleck, she has a sultry scene with him in the movie, one that she has to keep quiet, given that the film’s plot depends upon it.

But those who read the book know that her role in crucial, and plays a part in possibly incriminating Dunne, who is one of the suspects in the disappearance of his wife.

Here’s what you should know about her character and the making of the film. Spoilers ahead.

1. She Doesn’t See Andie as a Mistress

As the “other woman” in Nick’s life, Ratajkowski has people calling her “the mistress” in the film, but she sees another side to her character.

It’s funny. I get defensive when people say, ‘Oh, you play the mistress.’ In my mind, she’s just a girlfriend who really loves her boyfriend and has been taken advantage of and doesn’t realize that. Of course, she doesn’t understand the full situation, which really breaks her heart later in the story.

2. She Didn’t Mind the Nudity

In one scene, the actress is topless and straddling Affleck. Ratajkowski said everyone was ultra professional and made her feel comfortable in the compromising position.

She told MTV, “It was a small, closed set. Everyone, we had been in Missouri for several weeks together. It felt like I was with family almost. You’re in character, so it doesn’t feel personal.

“I was very lucky to work with people who make you feel the most comfortable,” she told Access Hollywood. 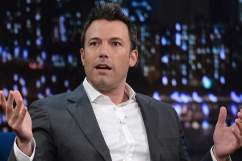 Ben Affleck as Nick in ‘Gone Girl’: 5 Fast Facts You Need to Know

3. She Read the Book Before Getting the Part

“A family friend had sent it to me and said, ‘It’s the prefect beach read.’ I brought it on vacation with me and read it very quickly,” she dished in the interview above with Access Hollywood.

Then she got a call from the film’s casting department, however, she didn’t get her hopes up at first.

After her initial audition, she got a call the next day, and read with Affleck. “Two hours later they called me,” she said.

She told the Daily News, “I screamed and called my parents. It was surreal.”

4. She Thought It Was Surreal to Kiss Ben

In an interview with the Daily News, she said, “It’s when you get off work and you’re driving home and you think to yourself, ‘What did I do today? Oh right, I made out with Ben Affleck…It occurs to you, this is my job.”

After Gone Girl, she made a movie with Zac Efron called We Are Your Friends.

Her mother predicted that her daughter had already made it in Hollywood.

“Now she calls me before the premiere and was like, ‘Now you are a movie star,’ ” said Ratajkowski in the Daily News.