Parenthood 6×04 Promo "A Potpourri of Freaks" (HD)Parenthood 6×04 "A Potpourri of Freaks" – Max (Max Burkholder) meets a new friend who means more to him than Kristina (Monica Potter) and Adam (Peter Krause) initially expect. After an awkward run-in with Sandy (Betsy Brandt), Sarah (Lauren Graham) tries to understand her place in Ruby's life, and conflict-averse Hank (Ray Romano) must test…2014-10-10T03:04:42.000Z

In tonight’s episode of Parenthood, Julia and Joel discuss how to break the news of their permanent separation to their family.

Watch the preview above for a sneak peek into all the drama.

Meet the actress behind one half of the couple every fan of the show is rooting for, Erika Christensen.

1. She Cried Over Julia & Joel

With the sixth and last season of Parenthood upon us, we see the couple still separated, with Julia dating her law school ex.

In January, she said that she sees a reunion in Julia and Joel’s future. “Ultimately, I do. They’ve got ten years of a loving relationship under their belts and, in the interest of their children and everything, I think they can,” she said.

In an interview with Parade, she dished on how attached she and Sam Jaeger, who plays Joel, are to their on-screen relationship. “We’ve discovered how incredibly personally invested we are in these characters, because we’ve been fighting this thing every step of the way.”

This includes tearing up when things don’t go well for the two.
Christensen told Access Hollywood, “We genuinely, Erica and Sam, cried about the storyline. It caught me by surprise how invested we were personally in that relationship.”

In a recent interview, E! News asked Jaeger about the chances for a reconciliation, and he said, “There’s always a chance for them to get back together. And hey, I’d love to report that all of season six is us just sitting around laughing and hugging each other. But there are more conflicts and more outside and inside threats to their relationship. They are just different people now than where the season ended. We certainly don’t start where we left off.”

2. Her Breakthrough Was Playing a Coke Addict

Playing a 17-year-old cocaine addict in the 2000 drama Traffic, directed by Steven Soderbergh was the role that put her name on the Hollywood map.

When the movie was released, the New York Times gave her an accolade for her portrayal.

“The most indelible performances belong to Benicio Del Toro as a burly, eagle-eyed Mexican state policeman of pluck and resourcefulness who has the street smarts to wriggle out of almost any squeeze; Michael Douglas, as a conservative Ohio Supreme Court Justice who is appointed the country’s new drug czar, and Erika Christensen, as his sullen drug-addicted teenage daughter,” the paper said.

As a teenager, she had no idea about drugs and researched her role by attending Alcohol Anonymous meetings. “I have no experience in drugs whatsoever, so I did a lot of research on exactly how cocaine affects your body,” Christensen says. “Real specifics, down to when you use, how long does it take for the high to set in, and how long the high lasts,” she told Hollywood.com.

There was one aspect that made her uncomfortable.
She told Buzzfeed, “I just didn’t want to do nudity. Soderbergh was, like, ‘Have you seen my movies?’ Ultimately, it’s a rough topic. But that movie is essentially the truth of it. I also really trusted the writing, which is so cool. The script is correct. Stephen Gaghan wrote that character from experience, and I knew that. He said, ‘This is me at 17.'” 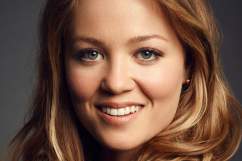 Erika Christensen, Julia on ‘Parenthood’: The Pictures You Need to See

BEST TRAILER EVER (swimfan)this is the first trailer iv done lol and i liked it it's from the movie swimfan which i really liked, so i hope u guys enjoy it it's about a girl (erika christensen) whose obsessive about a guy called ben (jesse bradford) so she would do anything to get to him, even kill people….…2009-02-19T15:04:17.000Z

If you were a teen in 2002, you’ve seen or heard about the movie where Christensen plays an obsessed fan of a high school swimmer.

The actress realizes that the character was extremely disturbed.
She told Buzzfeed, “I’m kind of impressed with myself because that character is so insane. I remember the yelling. I’m so glad that nobody made me aware of what I was doing at the time.”

With Swimfan and Traffic as some of her earliest work, she was painted as a certain kind of character. “As far as Hollywood, I guess I’ve just been perceived in a darker sort of way,” she told IGN.

Erika Christensen, Scientologist | Ep. 3 Part 3/3 Across The Board | Reserve ChannelErika Christensen talks with her Parenthood co-star, Joy Bryant, about what keeps her grounded in the harsh business of Hollywood. Christensen credits her religion, Scientology, with helping her succeed. She then dispels a few rumors about the Church of Scientology, such as rabbit worship. Across The Board w/ Joy Bryant This action talk show hosted…2013-01-15T08:00:39.000Z

Since her parents are both Scientologists, she started practicing from a young age. Watch the clip above, where she talks about the religion with her costar Joy Bryant for her web series Across the Board.

“If I had to sum it up, the goal of Scientology is giving the person back to themselves. Like, your own power of choice,” she explained to Bryant.

In an interview with Buzzfeed, she said, “Obviously, people make fun of what they don’t understand. I also know that Scientologists have a tendency to be super excited when they’re trying to explain things. And people are, like, ‘You sound crazy.’ Which I know I’ve done too. Just calm down. Form sentences. And, like, make sense. Instead of being like, “It’s so cool!” You can get super, super excited and passionate. And I’ve seen us as a group do that. And then you look crazy.”

“I think actors specifically have been burned by being associated with weird things. We’re so, so open. And I think that the Church has realized increasingly people don’t know we are, and that’s the problem. You just need to see we’re so transparent,” she continued.

Going on six years of fake marriage with the man. (See his feed for how long it took us to get a decent picture.)

She told Parade about her experience:

It’s really pretty special. It’s bizarre and so surreal sometimes, but I really love, first and foremost, just keeping in touch with my friends because you feel so connected. As far as fans go, I really am blown away by people saying, “Oh, I just saw you grocery shopping,” which may seem creepy, but it’s actually not. Then the people writing from Italy and Sweden and wherever else in the world. The fact that it actually goes straight to me without encroaching upon my privacy. It’s of my own volition. It’s not my phone number or my email, but it’s my Twitter account where I’m willing to just be there. And all the other people that are way more famous than me that I get to interact with. That’s awesome. It’s a really fascinating way to have personal contact in a way that’s still protected and safe. I’m a huge advocate of all of it.