Javier Bardem has come a long way from his early life in Spain.

He has worked hard to join the ranks of Hollywood greats and has an Academy Award to show for it.

In his personal life, he is just as successful, being happily married with two children. He tied the knot with Penelope Cruz in 2010 in a low-key ceremony keeping with their private lifestyle.

Here’s what you should know about the 45-year-old actor.

Penelope Cruz get named 'Sexual Woman Alive 2014' by Esquire! Who else do u think deserves this title? @DjAliZeCa pic.twitter.com/Gqj0LLKhVK

Bardem and Cruz met on the set of 1992’s Jamon, Jamon. It was Cruz’s first movie, and at that point, Bardem was an unknown.

In the scene below, we witness Bardem passionately planting a kiss on his future wife on the dance floor.

Years later, they went on to costar in 2008’s Vicky Cristina Barcelona, with Cruz playing his emotional ex.

Watch the clip below, where the love triangle between them and Scarlett Johansson’s character plays out on screen.

This year, the pair shared the screen yet again in The Counselor.

2. He First Publicly Acknowledged His Relationship at Cannes

He professed his love for Cruz during the 2010 Cannes Film Festival.

In the video above, subtitled in English, he said, “To my girlfriend, my companion, my love: Penelope. I owe you so much and I love you a lot.”

The camera then cut to Cruz, and we see her tears of happiness as she blows him a kiss. 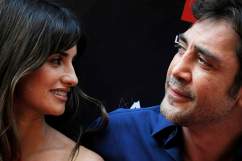 In 2010’s Eat Pray Love, based on the Elizabeth Gilbert memoir, he starred as Felipe, the latin heartthrob who Gilbert eventually married in real life.

Watch the clip above to see a scene between him and Julia Roberts, who played Gilbert.

Roberts told Elle about how her friends reacted to her and her costar:

When I got sent the trailer for the film, I had, like, three or four girlfriends over at my house. And I put the thing in, and as soon as Javier came on, they were all like, `Oh!’ The collective swoon. I just started giggling. He’s a very charismatic guy, but that’s not how I think of him in my heart now. He’s kind of like my bud.

4. He Was Born in Spain to a Family of Actors

The actor was born in the Canary Island and remembers a time in Spain when life was hard.

He told The Guardian, “It was a very troubled time, to the point that to have the surname Bardem in those times was not good; you were pursued and put in jail. I was too little, but I saw things. People being arrested, my mother crying because colleagues of hers and people she loved were imprisoned or disappeared. The streets were violent.”

He told the paper about the long list of actors in his family:

My mother is an actress; my grandfather and grandmother were actors. The parents of my grandparents were actors, in a time when actors were not allowed to be buried on sacred land. Terrible. My uncle is an actor, my brother is an actor and a writer, my sister used to be an actress. My cousins are actors. I’ve seen since I was born all that you can imagine in an actor’s life. So I don’t buy anything. I don’t buy success. I don’t buy failure. I only buy commitment.

In 2007, he won the Academy Award for Best Supporting Actor for playing Anton Chigurh in No Country for Old Men.

He told the Telegraph about being honored in that way:

And the whole Oscar thing, that is just surreal: you spend months and months doing promotion, and then come back to reality with this golden thing in your hands. You put it in the office and then you just have to look at it sitting on the shelf. And, after about two weeks, you go: “What is that doing there?” It would be stupid to believe that they give it to you because you are a better man