Houston stripper and world-class twerker Jhonni Blaze claims Drake had his entourage kick down her door and threaten her life after a sex romp with the rap icon led to bitter jealously. Sources close to Drake say her story is completely false.

Here’s what you need to know about Jhonni Blaze:

“Twerk Queen” and popular stripper Jhonni Blaze, real name Jzapal Jackson, is claiming Drake had been angrily texting her and that people from his “camp” even came to her home, threatening her life. She did go to police but has not pressed charges. There is now a police investigation and the police have not named Drake, saying only that they are investigating a celebrity, reports TMZ. Sources close to Drake say the allegations are false.

You can listen to Jhonni Blaze speak in depth on the allegations and rumors about herself and Drake below:

2. She Was Jealous That Drake Was Hanging Out With Another Stripper

Baller Alert interviewed Blaze by email and shares her side of the story:

They exchanged numbers, Drake giving her his iPhone and Blackberry contact information and before jetting off, he and Jhonni had weekend long sex-capade UNPROTECTED. “I asked him why he messed with me with no condom, what if I get pregnant. He said ‘I’m not worried about that, I just want to give you the best of me’. He wanted to feel all of me. He ate me out. He kissed me. He’s a loving sexual person,” she tells Baller Alert. Jhonni does admit that she and Drake got into a heated argument in the club on his last night in town, over him talking to another girl while they were together. He later apologized via text messages. … She also says that he made plans to fly her to Toronto later in the month but instead ended up flying her friend out just days later. Jhonni says that when she caught wind of the news that Lira [Galore] was in Toronto, she confronted Drake about it to which he denied it and tried to make her come off as crazy. She says that he called her a b****, told her that she was going to look stupid when the truth came out and to stop contacting him. … She also says that Drake even went as far as having her talk to his mother to validate his side of the story. That was until he posted a photo of he and Lira having drinks, then there was no more denying it. Once the pics were posted, Drake’s tune changed and he assured Jhonni that Lira was only in town to film a music video and that he never had sex with her.

Head over to Baller Alert to see several screenshots of an alleged text conversation between Blaze and Drake.

She also told Baller Alert, “Drake made calls and sent men to her place of employment in an attempt to shake her up. Jhonni was not working that night and when they could not find her, instead sent their threats through her friend. The goons warned that Jhonni was going to ‘catch an issue.’ Drake put a price on her head.”

According to Blaze, these men even kicked down the door to her apartment — where another female friend and her 10-month-old child were also staying — prompting her to file a police report.

This is not the first time Drake has been in a similar situation. In 2012, Ericka Lee, Drake’s ex-girlfriend and female voice on Drake’s song “Marvin’s Room,” accused Drake of making threatening phone calls and not paying her royalties for her work on the song.

Below is a video of Jhonni Blaze and Lira Galore dancing together:

3. She Reportedly Had a Miscarriage on Stage

Back in 2013, it was reported that Blaze had a miscarriage while twerking on stage, when she bled profusely. Some witness say that when she went off stage she was having convulsions. After paramedics arrived, she was taken to a hospital where she was reportedly given a transfusion.

Blaze never confirmed or denied reports about what happened on stage.

4. Blaze Was Once Arrested Around the Time Her Boyfriend Was Shot Dead

In spring of 2014, Vlad TV reported Blaze was arrested in the shooting and death of her boyfriend, Brian Washington, in September.

Hollywood Street Kings reported she was wanted for questioning regarding his death, but she fled to Atlanta to avoid being questioned. A warrant was filed for her arrest with the charge being “fugitive from justice.”

Blaze refuted this claim, saying she had missed court on an assault charge and provided this photo:

(Straight From The A)

5. She’s a Self-Described ‘Pole Assassin’ Who Was in a Chris Brown Video 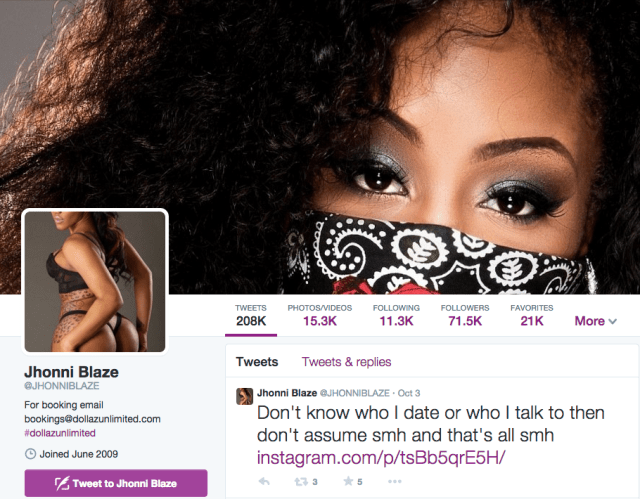 Real name Jzapal Jackson, Blaze was born in New York and attended Hillcrest High School. She is a video vixen, model and stripper, featured in music videos from Chris Brown, French Montana, Young Berg, Jim Jones, Jadakiss and others. Blaze has also been featured on the covers of King, XXL, Hip Hop Weekly, and Black Men’s Magazine. She is currently working with Rich Dollaz.