Kimora Lee Simmons is pregnant with her fourth child.

The baby’s father is Simmon’s husband since February, Tim Leissner.

1. She Has Her Own Reality Shows

Kimora:Life in the Fab Lane aired in 2007. In an interview with Frisky, she explained, “The point of my show is that it’s about what is fabulous to me, which is my family and my business.”

House of Fab, which premiered in 2013 , takes viewers into her personal life and career.

It focuses on JustFab, where Kimora is President and Creative Director.

She told Hello about how her children handle being in the spotlight, “The paparazzi attention can make them a little nervous. They love photoshoots and modeling – they don’t mind that part. But they haven’t done that for a year or more.”

2. She Was Married to Russell Simmons

The couple works out co parenting together.

For me, the key is just doing the best you can to make it work. I definitely have had ups and downs with Russell [Simmons]. We have a great relationship, but I had to whip him into shape. It was not easy. We had some issues and some fights and I had to stand up for what I believe in, and he had to say, “You’re being a little too pushy.” And I said, “I don’t care—it’s my kids!” When it comes to parenting with the ex, you have to be respectful and try to be considerate and you always have to think of the children first.

She also has a son, Kenzo Lee Hounsou, with actor Djimon Hounsou. 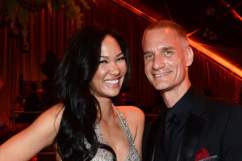 3. She Was the Head of Baby Phat

She started the brand with Russell and when her involvement ended, she told the Daily News, “It’s over. It’s absolutely over. It was very abrupt and sudden. I was shocked.”

After that, she went on to start two labels, KLS and Kouture by Kimora. She also launched a skincare line, Shinto Clinical.

Her career began at 13, when she signed with Chanel, the youngest model to work for the brand.

As far as advice for young models out there goes, she told Hello, “I would say there are definitely pitfalls and you have to be careful, and keep your head on your shoulders. But the business is a lot of fun, that’s for sure.”

According to her business website, she has modeled for Vogue, Elle, and Harper’s Bazaar, and designers such as Christian Dior, Roberto Cavalli and Yves Saint Laurent.

5. Her New Husband is a Banker

He works for Goldman Sacs. They secretly married in February.