On tonight’s episode of Dancing With the Stars, Leah Remini steps in for co-host Erin Andrews, opposite Tom Bergeron. Andrews will be away, covering the World Series. In excitement for her appearance on the show, Remini has stated to E!:

So excited to be back on the show, even more excited I don’t have to dance! I hope ABC has a delay, gonna speak my mind!

When Remini first got the gig of temporary co-host, she tweeted: So excited about this! Tom Bergeron, hope you can handle me! The former King of Queens star won’t be the only guest on the show as Pitbull joins the cast as a judge for the night in addition to performing his hit song “Fireball.” Read on for all the facts on Remini’s past on Dancing With the Stars, her husband, her reality show, and her battles with Scientology over the years.

Angelo Pagan is Remini’s long-time husband, who is also an actor. He’s appeared alongside John Travolta in the movie Swordfish and even made some appearances on Remini’s show King of Queens in the past. You can watch Pagan on the show in the above video clip at around the 7:37 mark. Currently, he’s working on a project called Restored Me. Since 1999, however, Angelo has put his management duties for Vivian’s Millennium Cafe before a lot of his acting. He co-owns the diner restaurant with Remini’s stepfather George.

Starcasm reports that Angelo has three sons from previous relationships, while he has a 10-year-old daughter with Remini named Sofia Bella. The two have been married since July 19, 2003, and Pagan proposed over a candle-lit dinner at a Los Angeles restaurant in 2002.

2. Remini Competed on DWTS on Season 17

Lisa Remini was on the 17th season of Dancing With the Stars and had Tony Dovolani as her partner. This season, Dovolani was paired with Betsey Johnson. Remini and Dovolani came in fifth place and the two still keep in touch, as you can see in the below Instagram pic.

Remini has also kept in touch with others from the DWTS cast like Maksim Chmerkovskiy and Cheryl Burke. While Remini was on the show, she had many of her A-list friends come visit in the audience to support her, like Chelsea Handler and Jennifer Lopez. Just recently, JLo and Remini were involved in a car accident where they were hit by a drunk driver. They were with their children and everyone was okay, but they were sure to document the incident on Instagram.

3. Leah Remini: It’s All Relative Is Her Most Recent Project

With the rest of her family, Remini stars on their own reality show Leah Remini: It’s All Relative on TLC. TLC describes the show as this:

Leah’s living in Los Angeles now, but she still has her Brooklyn roots (and accent). Her day-to-day reality is about keeping her over-achieving tendencies under control and managing a household full of hijinks — and funny personalities! In the show, you’ll meet Angelo, who’s a devoted father helping run their family diner, and Sofia, who’s the spitting image of her dad with her mom’s personality. Filling out Leah’s household are her opinionated mother, Vicki; eccentric stepfather, George; down-to-earth sister Shannon; and Sofia’s British nanny.

Check out a clip from the show above.

4. Her Leaving Scientology Has Been a Huge Scandal In the Media

Husband Angelo Pagan converted to Scientology when he was dating Leah Remini and they were married by a Scientology minister. Together, Pagan and the rest of Remini’s family joined denounced the religion in 2013. Remini was very vocal about the details and why Scientology was so toxic for her family. Remini opened up to the media about interrogations she endured from the church, “thought modifications”, encounters with the leader of the church, and being blacklisted. 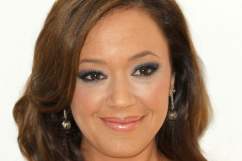 5. We Also Know her as Stacey Carosi

We all grew to love Leah Remini when she first appeared on Saved by the Bell as Zack Morris’ love interest Stacey Carosi. The hard-ass New Yorker and daughter of Zack’s boss took some getting used to, but her tough attitude drew in viewers. Here’s a blast from the past in the above video. 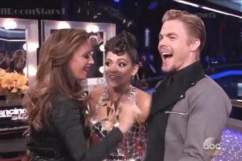 WATCH: Leah Remini Beats Derek Hough With a Microphone on ‘Dancing With The Stars’