Leslie Jones is a brand new cast member on Saturday Night Live and tonight is her first show as a full-time gig. Jones was born in Memphis, Tennessee, but moved to Los Angeles with her family when her dad got a job at Stevie Wonder’s radio station, KJLH, as an electronic engineer. With an athletic talent, Jones managed to attain a basketball scholarship to attend college. In fact, she almost chose a career in basketball, rather than comedy. While in college, Jones participated in stand-up and even won a contest, which prompted her to move back to Los Angeles and dive into comedy.

2. She’s Most Known for her Showtime Special Problem Child

“Big Les” is most known for her comedy special titled Problem Child. Check out the full stand-up routine in the above video.

3. Jones Is Also a Writer for SNL

Leslie Jones is the latest woman to join the SNL cast after becoming a writer earlier this year. Though she is now a full-time comedian on the show, she will continue to act as a writer as well. According to People:

Jones first auditioned for the coveted spot last fall as one of twelve finalists, but the role was ultimately offered to Sasheer Zamata.

4. She’s Appeared on SNL Before Becoming a Full-Time Cast Member

Prior to becoming a cast member of the show, Jones appeared on Saturday Night Live as part of the Weekend Update skit. Her appearance made light of “slavery rape” and many viewers were up in arms over the controversial jokes. Check it out in the above video.

In addition to appearing in the above skit, Jones also appeared on the show in the first and third episodes of this season, hosted by Chris Pratt and Bill Hader.

5. Her First Night as a New Cast Member Is a Big One

Just want to say I'm so excited! Very pumped and motivated. Thanks SNL for welcoming me into the family. #blessed #AMAZING

Jones’ first night on the show as a full-time comic is going to be a huge episode for SNL with the legendary Jim Carrey as host and the bootylicious rapper Iggy Azalea as the musical guest. Carrey is promoting his new movie Dumb and Dumber To, which is a sequel that fans have waited 20 years for. Azalea will be debuting her new song “Beg For It.”

For more information on Jones’ first night SNL guests, check out the below links: 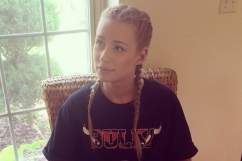